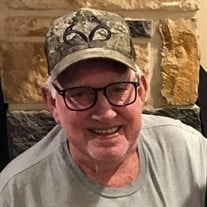 A loving husband, father, grandfather, brother, uncle and friend, Marvin Hugh McCarty went to be with the Lord on February 2, 2022, at the age of 80 in San Antonio, TX. He was preceded in death by his parents, Herman and Eber (Elvie Fulcher) McCarty; brother, Denver Lee McCarty; sister-in-law, Loraine Foster (Dowe); brother-in-law, Charles Hill, granddaughter-in-law, Daffney Burrier Smith, and close friend/fishing buddy, Tom Alexander. Marvin is survived by his loving wife of 62 years, Carolyn Nell Holt McCarty; children, Debbie McCarty Ricord Smith (Jim), Randy McCarty, and Carla McCarty (Kevin Rinehart), son-in-law Lonnie Ricord (Lillian), daughter-in-law Carole Broemer; sister, Gale Hill; sister-in-law, Wanda McCarty Sultemeier, brother-in-law, Archie Holt; 9 grandchildren, Ginger Wells (Johnny), Landon Ricord (Loran), Jordan Ricord, Josh Broemer (Christa), McKayla McCarty, Kaylep McCarty (Eunice), Chris Smith (Tiffany), Jim Ray Smith Jr. (Patty), and Kyla Rinehart; 11 great-grandchildren, Emma, Jack, Charlie, Riley, Kaydence, Paisley, Makala, Joshua “Wally” Walter, Robert, Layla and Austyn; Honorary great-grandchildren, Bree, Gus, Coltyn, and Bryson; nephews and nieces, Clent Hill, Tonja Wright, Tylene Aust, Yvette Hill, Paul McCarty, Julie Lane, Doug Holt, and Jason Holt, plus numerous extended family and close friends. Marvin was born in Muleshoe, TX and grew up in and around the Lubbock area. He met and married his wife, Carolyn in 1959 and the two of them have been inseparable ever since. They moved to Natalia, TX in 1971 where they raised their two children, Debbie and Randy. They were surprised later in life with their second daughter, Carla. Marvin was an incredibly talented bricklayer and stone masonry master his entire life. Much of Texas is littered with his artistry in homes, barbecue pits, sidewalks, monuments, and his infamous fireplaces. He always took extreme pride in his work and it will be his legacy for years to come. His craftsmanship was highly sought after and admired by all. When not working, you could find Marvin setting and checking trot lines for monster catfish or whatever was biting. He found great joy in fishing and hunting, never missing a chance to be at the deer lease or in a jon boat. To his family, he was Dad, PawPaw, Uncle Marv, and brother, always willing to share his wisdom, advice, and support. He enjoyed a good fire and an even better conversation with whomever was around. He literally never met a stranger. His unmistakable and exuberant greeting of “Well hello (insert name)…” followed by a stern handshake or warm hug is a testament to his kind and welcoming spirit. Marvin’s family would like to send a heartfelt thanks to David Naegelin and family, Sheila and Patrick Guillen, Paula and Scott Dean, Jerry and Heather Chessher, Jake and Jennifer Criswell, and Reed and Sherry Hebert. The family would also like to acknowledge the physicians, nurses and other healthcare providers at Christus Santa Rosa Hospital-Westover Hills for their compassionate and skillful care. Visitation will be Monday, February 7, 2022 from 5:00 to 8:00 p.m. at Mission Park Funeral Chapels South. Funeral Service will be on Tuesday, February 8, 2022 at 12:00 p.m. at Mission Park South. Interment to follow at Mission Burial Park South.

A loving husband, father, grandfather, brother, uncle and friend, Marvin Hugh McCarty went to be with the Lord on February 2, 2022, at the age of 80 in San Antonio, TX. He was preceded in death by his parents, Herman and Eber (Elvie Fulcher)... View Obituary & Service Information

The family of Marvin Hugh McCarty created this Life Tributes page to make it easy to share your memories.

Send flowers to the McCarty family.