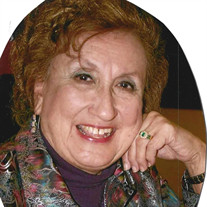 Our Mom was reunited with our Dad once again after nearly 30 years of being apart from our dad's sudden calling from God. On February 18, 2022, Mary Aida Villalon, beloved mother, grandmother and aunt was called by our Lord to enter into eternal life. Our Mom was born on April 15, 1934, in San Antonio, Texas to Guadalupe and Isabel Pena. She passed peacefully at her home as she had wished. Our mom was preceded in death by her parents, Guadalupe and Isabel Pena, our dad George Villalon, her sister Estella Bustamente and numerous cousins and in-laws. She is survived by her twins America and Victor Villalon (and wife G.G), grandchildren Lucas and Gia Villalon. Also, survived by numerous loving nieces and nephews. Our Mom was born and raised in the "5 Points" area which included the "Uptown" part of San Antonio in the house that her grandfather had built. She often shared her stories of growing up in that area, including learning how to skate and swim at San Pedro Park, Trick-O-Treating at Rainbow bakery and watching movies all day long at the Uptown theatre. She was a graduate of the Class of 1952 at Thomas Jefferson High School. If Mom was known for one thing, it was that she dedicated herself to any task that she found interesting and challenging. Mom enjoyed working for Lincoln Life Insurance company until she became a wife. After marrying our Dad, she was a devoted Full-time Mom and wife and put all her time and attention into her duties. With our Dad, she became very active with the non-profit organizations that provided assistance for students in the Mexican-American scholarship funds for college in the 60's which included holding offices as Treasurer and Secretary. After a very serious bout of Asthma that affected her health for 4 years, she bounced back to become very active with St. John's Catholic church in the 70's, including the bi-annual festivals, Alter Society and Sewing Circle which made Baptismal bibs. By 1977, after moving the Monticello Park neighborhood, she returned to work part-time as a Teacher's Assistant at University Day School. By the early 80's, she became active with the newly formed Monticello Park Neighborhood Association, again holding offices or as Board Member. After our Dad passed away in 1992, Mom was offered a job by the wonderful and thoughtful Rodriguez family from Thrif-T-Mart. Mr. Fermin and Mrs. Ramona along with their daughter Alma, lifted Mom's spirit and became her best friends. She was bursting with excitement to return to work and feel "useful" again. After her first grandchild was born, she retired from work to take care of her grandson instead of having him in Daycare. She came out of retirement to work again at Thrif-T-Mart while her grandson went to Pre-K. Mom loved her job so much that she did not retire until she was 70 years old. Over the years, Mom took up hobbies such as ceramics, oil-painting, and arts and crafts. She enjoyed being the main cook for family gatherings and social functions. To see her decline over the years from such a hopeless disease of Alzheimer's Dementia became very painful for her to endure and accept. She held out for self-care as long as she safely could. Our family extends our appreciation to Holy Savior Hospice staff, Meals-on-Wheels volunteers and her primary physician of 37 years, Dr. Burton Shaw. Visitation for our Mom will be on Thursday, March 3, 2022, at Alamo Funeral Home, 624 N. Alamo, San Antonio, Texas 78215, from 5:00 pm to 8:00p.m. with Rosary starting at 6:30 pm. On Friday, March 4, 2022, Mass will be celebrated at St Paul's Catholic Church at 10:30 AM on 350 Sutton, off of St Cloud. A procession to Holy Cross Cemetery will follow for interment. In lieu of flowers, donations can be made to Meals-on-Wheels or the Humane Society.

Our Mom was reunited with our Dad once again after nearly 30 years of being apart from our dad's sudden calling from God. On February 18, 2022, Mary Aida Villalon, beloved mother, grandmother and aunt was called by our Lord to enter into eternal... View Obituary & Service Information

The family of Mrs. MARY AIDA VILLALON created this Life Tributes page to make it easy to share your memories.

Our Mom was reunited with our Dad once again after nearly 30...

Send flowers to the VILLALON family.