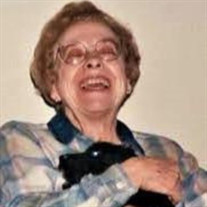 Naomi Ellen Hedglin passed away peacefully on September 17, 2021 in San Antonio, Texas. She was born August 30, 1924 in Clarksburg, West Virginia to William E. Roy and Chloe Hays Roy. Naomi was preceded in death by her beloved husband John Warren Hedglin; her sisters Betty Jean Riemsnider and Eleanor May Tenney; and her niece Ruth Ann Hogberg. Naomi had no children. She is survived by her nephew, Eugene Hickman and his wife Barbara of San Antonio; her great-niece, Theresa McNett and her husband Jeff of Piqua Kansas; her great-nephew, Eric Henry of Detroit Michigan, son of her neice Ruth Ann Hogberg; her great-great-nephew, Isaiah Hickman, son of Eugene and Barbara Hickman, his wife Brittany and their daughter Berlin; and her great-great nieces, Ashley McCoullough and Dakota McNett, daughters of Theresa and Jeff McNett. She is also survived by a niece, Donna White of Parkersburg, West Virginia. Naomi was a professional woman who worked with the Air Force Security Services her entire career. She started her career as a cryptoanalyst clerk at Arlington Hall Station, Virginia in 1944 during World War II. Her work was vital to the war effort and helped defeat Nazi German. She retired at Kelly Air Force Base March 1, 1980 as a GS-11 administrator. Naomi’s life centered around her husband and her church. Naomi and Warren were married on March 13, 1950 in San Antonio and lived the rest of their lives there. They were totally devoted to each other. They traveled a great deal both nationally and internationally and especially enjoyed Christmases together with their nieces and nephews and Warren’s sister, Ruth May Hickman. Naomi was an active member of Castle Hills Baptist Church which today is Mission City Church. She and Warren contributed a great deal of time, money and energy helping that church to grow, expand and preach the Gospel. They donated funds to Baptist University of the Americas to provide a Baptist education in support of missions. They also contributed to a number of organizations that furthered their Christian goals to include the San Antonio Food Bank, Meals on Wheels, Mission Dignity, San Antonio Humane Society, San Antonio Rescue Mission, Time for Christ Jail Ministry and the Salvation Army. Naomi was a kind, fun-loving and a generous spirit who will be sorely missed, but never forgotten by those who knew and loved her. Graveside services will be held at 10:00 AM on September 25, 2021 at Mission Burial Park North, with Pastor David George officiating.

The family of Naomi Ellen Hedglin created this Life Tributes page to make it easy to share your memories.

Send flowers to the Hedglin family.