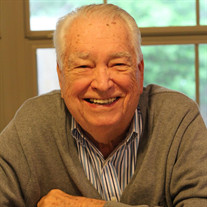 Paul Joseph Van Tuyl passed away on November 19, 2021 following a valiant fight to overcome a stroke. In his 84 years of life, he lived very fully. Born in St. Louis on December 31, 1936, he was the only child of sales professionals Wesley and Genevieve (Ambo) Van Tuyl. His youth was filled with plenty of snow, time spent with cousins and learning golf from his uncle who was a golf professional and course designer. Following the 1950’s relocation of his paternal grandparents from Missouri to San Antonio where his grandfather, Paul Van Tuyl, a celebrated artist and illustrator co-founded the Pitluk Advertising Agency, Paul and his parents moved to the Alamo City. He finished high school at Northeast High School. Tall and lanky, he enjoyed supporting various sports as team manager as well as yearbook photographer. Always industrious, he had many jobs during his school years including working at HEB. A lifelong patriot, he was very proud of serving his country in the Armed Forces. As an Air Force aircraft mechanic, he traveled to places including California and overseas with a tour in Okinawa, Japan at Kadena Air Base. He would regale stories about that time often and was quick to give credit for the doors it opened allowing him to mature and develop professional and personal skills that served him well. During this time, Paul began a lifetime appreciation of cigars and smoking and collecting fine tobacco pipes and humidors. Paul began a career in Human Resources at City Public Service in San Antonio and married Mary Louise Shodrok. After he received his Bachelor’s degree he began to work towards an advanced degree. Together they had two daughters, Cheryl Van Tuyl Jividen being the eldest. Eventually Paul’s talents led to USAA Life Insurance Company further honing his human resource acumen doing college graduate recruitment at campuses. He began a new chapter when he married Carol (Coggeshall) Taylor and welcomed her sons Todd Taylor and Tobin Taylor into his family in 1972. He earned his Master’s degree from St. Mary’s University. His intellect, strong work ethic, and team-building leadership garnered him recognition and eventually a role as an officer of USAA, managing human resources as a Senior Vice President, overseeing employees across the U.S. He was principally cited with the creation of innovative employee programs such as the regional vanpool service, casual dress Fridays and the four-day workweek as well as 401k benefits. His skills were tapped to lead nation-wide real estate acquisitions as the company grew and even a management role in the new USAA Federals Savings Bank before his 25 years concluded with retirement in 1993. He would continue to use his expertise as a business consultant and opened his own thriving, global retail Olympus Camera business. Throughout his career, his counsel, wisdom, and guidance were shared as he served on St. Mary’s University, Board of Directors. He also created the Business Careers High School as an offshoot of Holmes High School. He also taught San Antonio ISD students about investing in the stock market. Following a relocation from San Antonio to Ingram, Texas in 2007, Paul and Carol enjoyed his beloved Texas Hill Country and made many friends. He was very active in their community and served in leadership roles in their neighborhood association. Always a gardener, he’d won many yard of the month awards in his life and enjoyed raising vegetables and fruit trees. Ingram challenged those skills with a different climate and the deer population. Paul always enjoyed camping and was an avid fisherman. With the enlarged family he and Carol purchased one of many pop-up campers, and trailers for trips to the Texas coast where he taught the children how to fish. Eventually acreage in Wimberley, TX was purchased where camping occurred throughout the year for more than a decade allowing the kids to grow up with the joy of the outdoors, tubing and fishing the Blanco River, and wildlife watching. He would play his guitar and tell stories around the campfire. Paul and Carol enjoyed vast global travel where he was able to advance his interest in photography chronicling each trip with many photos, especially of flowers. In total they journeyed on 39 cruises occasionally leading travel groups. In 1992, they gifted a Hawaiian cruise for the entire family where Hurricane Iniki, the largest ever in the region delivered massive waves. They enjoyed dozens of trips to global destinations. He considered Hong Kong, Russia, Hawaii, and Canada among his favorites. Often, they repeated destinations, that included annual visits to the Mexican border and many Texas camping trips in one of their many RV’s or fifth wheelers which they took across the U.S. over the years. Car enthusiast is not descriptive enough for Paul. He bought and sold over 50 automobiles in his lifetime. He loved Corvettes, Cadillacs, and trucks with Hemi engines. A knowledgeable history buff, other hobbies included golfing, collecting watches, barbecuing, smoking meats and making bread. He was very astute on world events and politics and he and Cheryl often enjoyed sharing books and conversations on those subjects. His loving wife, children and friends remember him offering sage advice, always ready with jokes and humor, his friendly nature and incredible intelligence. Preceding in Death: mother Genevieve Van Tuyl, father Wesley Van Tuyl and wife Evelyn (Wheeler) Van Tuyl. Surviving are wife Carol (Coggeshall) Van Tuyl of Ingram, TX, daughter, Cheryl Van Tuyl Jividen and husband Doug of New Braunfels, TX, son Todd Taylor and wife Kathy of San Antonio, TX, son Tobin Taylor and wife Pam of Plano, TX. His grandchildren: Adam Taylor, Bridget Jividen, Ellery Jividen, Forrest Jividen, Jordyn Taylor Ruppercht and husband Joe, and Connor Taylor. Sister-in-law Shari Barrett of Ingram. Interment will be private and held later this year. In lieu of flowers, the family requests that donations be made to the American Stroke Association https://www.stroke.org/ in Paul’s name. For personal acknowledgement, you may sign the online guestbook at www.mission-parks.com in the Tributes section.

Paul Joseph Van Tuyl passed away on November 19, 2021 following a valiant fight to overcome a stroke. In his 84 years of life, he lived very fully. Born in St. Louis on December 31, 1936, he was the only child of sales professionals... View Obituary & Service Information

The family of Paul Joseph Van Tuyl created this Life Tributes page to make it easy to share your memories.