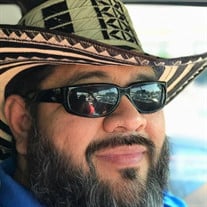 Rafael Arias, Jr. passed away on September 23, 2021 in San Antonio, Texas. He was born on December 18, 1970 in Laredo, Texas to Rafael Arias, Sr. and Maria Ramirez. Ralph at a very young age showed his aptitude in mathematics. He won numerous awards and trophies and won state during high school. Ralph received numerous scholarships. It was at this time Rafael knew he wanted to pursue his dream of furthering his education and becoming a Civil Engineer. Rafael attended Trinity University and became a member of the Bengal Lancer Fraternity. His brotherhood with his fraternity has remained strong through the years. Rafael then attended Palo Alto College for a short time and this is where he met his college sweetheart who would later become his soulmate and wife. Rafael, transferred to The University of Texas at San Antonio and obtained his Bachelor’s degree in Civil Engineering. He continued on to receive his Master’s Degree in Civil Engineering with a concentration in Watershed Resource Engineering. Rafael worked with various engineering firms but found a desire to help those who were in danger of living close to flood plains. For the next five years he worked with the San Antonio River Authority. Rafael then decided that he was ready to put his faith in God and started Arias H&H Civil Engineering LLC, specializing in StormWater Management Plans, FEMA CLOMRs & LOMRs, Floodplain Studies, Commercial and Residential Land Development Engineering the help of his family the firm was successful. Rafael, was a successful engineer but he was a much better husband, father, uncle, brother-in-law, brother, son, and friend. He loved to bbq and fish and always looked for the good in people. His love for music has influenced his children tremendously. The impact he had on everyone he knew will never be forgotten. The world has lost a great man!! To my Bubba, “You are my Always and Forever Love!!” The Arias Tribe will continue your legacy and live on for you!! Prior to his passing Ralph wanted everyone to know that he declared Jesus Christ is the Way, the Truth, and the Life- no man cometh to the Father, but by Him. He has been my Lord and Savior since January 1996. I know that I have not lived the perfect Christian life like I had wished, but the Lord has never forsaken me, and has always been there for me. He was preceded in death by his father; and his brother, Daniel Arias. Rafael is survived by his mother; his proud beloved wife of 29 years, Rosanne Arreguin Arias; daughter, Susanne Brianna Delle Arias(Miguel); sons, Andrew Aaron Arias, Joshua Nathaniel Arias; sister, Laura Monreal (Albert); brother, Hector Ruben Arias (Andrea); and Sierra Bowen, In-laws, cousins, and numerous nieces & nephews. SERVICES Visitation will be held on Friday, October 1, 2021 from 6:00pm-9:00pm, with a Prayer Service at 7:00pm at Mission Park Funeral Chapels North. Funeral Services will be on Saturday, October 2, 2021 at 10:00am at the funeral home chapel, with interment to follow at Mission Burial Park North. For personal acknowledgement, you may sign the online guestbook at www.missionparks.com in the Tributes section. MISSION PARK FUNERAL CHAPELS NORTH 3401 CHERRY RIDGE DR. SAN ANTONIO, TEXAS 78230 (210) 349-1414

Rafael Arias, Jr. passed away on September 23, 2021 in San Antonio, Texas. He was born on December 18, 1970 in Laredo, Texas to Rafael Arias, Sr. and Maria Ramirez. Ralph at a very young age showed his aptitude in mathematics. He won numerous... View Obituary & Service Information

The family of Rafael Arias Jr. created this Life Tributes page to make it easy to share your memories.

Send flowers to the Arias family.