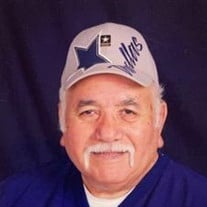 Rafael T. Garza, 84, of San Antonio TX, entered eternal rest peacefully on Saturday, September 11, 2021, at home, with his wife Vickey Garza of 59 years and family by his side. Rafael was born on October 24, 1936. in the small South Texas town of Artesia Wells and was raised in Cotulla, TX, He was the son of the late Alejandro and Maria (Trevino) Garza. Rafael or “Moso” which is short for the Spanish word Hermoso which translates to “handsome” in English. The nickname stuck as that is what his family and friends would call him throughout his time growing up as a kid and through adulthood. Our dad would tell us “if anyone in my hometown would talk about “Moso”, everyone knew who they were talking about”. He would also jokingly add “this wasn’t always a good thing!” Our dad loved to play sports growing up and excelled at baseball. Even as recently as two weeks ago, he told me stories of how he could hit the ball to all different parts of the field. No matter where the players moved he could always keep the defense guessing. He would jokingly say to the opposing team, no matter where you move “no mi importa”. This was his taunting which translates to “what do I care”, since he knew he could easily hit the ball to any part of the field and the team couldn’t catch it. This was Rafael’s attitude, work hard and play hard! Growing up dad would share stories of working hard, attending family functions and enjoying all the good food his mom would cook for him and his four brothers and five sisters. As a child, he and his family were migrant workers and traveled around the country picking cotton and tomatoes. As a young man, he would stack baled hay sometimes as much as 150 bales a day. The work was back breaking and he always remembered the sacrifices made to make ends meet. While in Seminol, Texas, while picking cotton, he met his future wife, Vickey. They both knew they were meant to marry one day. In 1958, Rafael joined the United States Army and was sent to basic training in Ft. Sill, Oklahoma where he it reaffirmed his work ethic and reinforced his strong Catholic faith. The stories we heard from his days in the military were seldom told and the details were few but my dad was always proud to serve his country. He served for four years and eventually returned home to the young woman he would later marry. On April 22, 1962, Rafael married Eduviges (Vickey) Mendez in San Antonio, TX at Our Lady Of Angels Catholic Church. Together they bought a home on the South side of San Antonio and remained in this same residence and raised a family of five daughters and three sons. All eight of their children attended Harlandale ISD schools and graduated from McCollum High School. Rafael was a member at St. Lawrence the Martyr Catholic Church since the church’s opening day. Throughout the years both Rafael and Vickey would volunteer as Catechism teachers, Eucharistic Minister, Cursillo Leaders, Prison Ministry, Marriage Encounters counselors and other various roles as needed. This was the foundation of service they have passed on to all their kids and grandchildren. Rafael was a hard worker throughout his life. After 40 years of truck driving and seeing all parts of the country and miles and miles of Texas, he retired to travel with Vickey. While on one of their trips visiting Crookston, MN his love for driving would be called upon again as truck drivers were needed to ensure the sugar beet crop would be harvested in time. Rafael would partner up with his Cunado (brother-in-law) Joe Mendez to go to Colorado. He continued driving as his love for driving trucks had never left his blood. In his spare time, he enjoyed praying for his family, friends and sick. He loved cheering on his favorite sport teams, the Dallas Cowboys and the San Antonio Spurs. His all-time favorite football player was Johnny Unitas, who played for the Baltimore Colts. However, he became a Dallas Cowboy fan in 1960 when they first came to Texas. We were fortunate that he was with us to start the 2021 Dallas Cowboy football season. He is survived by his loving wife, Vickey Garza; three sons; Rafael (Joyce) Garza of Fort Worth TX, Rodney (Adrianna) Garza, Cruz (Rebecca) Garza; five daughters; Lupe (Anthony) Mitchell, Ms. Elisa Garza, Juanita (Charles R) Gatrelle II of Spring Branch TX, Carmen (Tim) Cantu, Maria (Monico) Reyna, sister, Maria Luisa Carreon of Cotulla, Texas; two brothers, Alejandro (Maria Elena) Garza of Cotulla, Texas, Juan (Rosario) Garza of Austin, Texas and numerous grandchildren, great-grandchildren and nieces and nephews. Rafael was preceded in death by four sisters, Aurora Martinez, Valenta Rodriguez, Margarita Ramirez and Beatriz Zertuche; and two brothers, Manuel Garza and Ramon Garza. The family would like to extend a special thank you to the nursing staff of Embrace Hospice for their compassionate care. We would also like to extend a special thank you to Elisa, Lupe, Anthony and Alex Mitchell for their loving care. *** The verse below is from a song our dad wrote for our mom *** “Cuando yo la conoci, 17 años tenia Y el amor me hiso tuitar Por primer ves en mi vida

Rafael T. Garza, 84, of San Antonio TX, entered eternal rest peacefully on Saturday, September 11, 2021, at home, with his wife Vickey Garza of 59 years and family by his side. Rafael was born on October 24, 1936. in the small South Texas town... View Obituary & Service Information

The family of Rafael T. Garza created this Life Tributes page to make it easy to share your memories.

Send flowers to the Garza family.