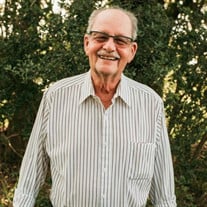 A loving husband, father, grandfather, brother, uncle and friend, Raymond Moore Gonzalez went to be with the Lord on March 24, 2022, at the age of 77. He was born on July 23, 1944 in San Antonio, TX. He is preceded in death by his parents, Reyes and Priscilla Moore Gonzalez, and daughter, Cassandra Larson. Raymond is survived by his loving wife of 48 years, Lucia E. Gonzalez; daughter, Elizabeth Gonzalez; 3 granddaughters, Destiny Neaves (Joe), Brianna Arroyo and Drew Larson; 2 great-granddaughters, Adalynn Grace Neaves and Emma Faith Neaves; siblings, Margaret Rivera, Patricia Curtis (Art), Stephen Gonzalez (Linda), Michael Gonzalez (Melinda) and Mark Gonzalez (Patricia); and numerous nieces, nephews, cousins and friends. Raymond Moore Gonzalez served in the U.S. Navy as an E4 during the Vietnam War on the USS Navasota (AO-106), a fleet oiler. The primary mission was to provide fuel to the fleet which made it necessary for the fighting ships to return to port when they were running low on fuel, ammunition, food and supplies. Raymond also handled the logistics on the USS Passumpsic (AO-107) such as records of what was being transferred, measured tanks before and after delivery, sent oil to other ships and different fuels for jets. He received three medals: National Defense Service Medal, Vietnam Service Medal, Vietnam Campaign Medal. After his service in the military he met Lucia Gonzalez the love of his life and best friend at a coffee shop in downtown San Antonio. They were married for 48 years. Raymond enjoyed his family, the outdoors, the ocean and being a business owner. He had a giving heart and would do anything for his family. He had a great sense of humor, and was a kid at heart. He was great at offering a listening ear and advise. He was a man of his word and a man of faith. Visitation will be Wednesday, March 30, 2022 from 5:00 to 8:00 p.m. with a Prayer Service to begin at 6:00 p.m. at Mission Park Funeral Chapels South. The Graveside Service will be held on Monday, April 18, 2022 at 10:45 a.m. at Fort Sam Houston National Cemetery.

A loving husband, father, grandfather, brother, uncle and friend, Raymond Moore Gonzalez went to be with the Lord on March 24, 2022, at the age of 77. He was born on July 23, 1944 in San Antonio, TX. He is preceded in death by his parents,... View Obituary & Service Information

The family of Raymond Moore Gonzalez created this Life Tributes page to make it easy to share your memories.

Send flowers to the Gonzalez family.