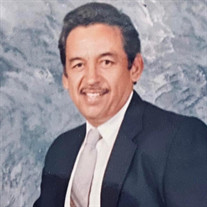 A loving husband, father, brother and friend, Refugio Vidaurri went to be with the Lord on September 2, 2021, at the age of 80, in Atascosa, TX. He was born on July 4, 1941 in Laredo, TX. He is preceded in death by his parents, Felix and Adelaida Vidaurri; sisters, Petra Parra and Armidia Ceja, and brother, Donato Vidaurri. Refugio is survived by his loving wife of 56 years, Angelita Vidaurri; daughters, Rosanna Vidaurri and Annette Vidaurri; grandson, André Christopher Lewis; sisters, Maria Acevedo (Fidel), Adelaide Capetillo and Dolores Vidaurri; and numerous nieces, nephews, other extended family members and friends. Refugio grew up in Laredo, TX and after marrying in 1965 he moved to Toledo, OH where he started working for the railroad and started a family. He moved back to San Antonio, TX to raise his family. He retired from the Union Pacific Railroad after 21years. Refugio was a man of faith and left that legacy for his family. He believed God first and the rest will follow. He spent his retirement years in Atascosa, TX attending to his home, gardening, collecting Christmas collectables to make Christmas special, breeding German Shepards to send to the police academy except for his best friend King. He supported many charities, worked part-time at a home goods store and kept in touch with long life friends who called him by his special old folk Spanish family nickname “Cuco”. Family was an important part of his life and he often had family get togethers. He was an encouraging loving father that was always there for his daughters and a good husband. He had a wonderful sense of humor, patience, lived life to the fullest and left his family with so many good memories. He supported and blessed his family in so many ways leaving them with love, hope, faith and strength as they celebrate his life. Visitation will be on Monday, September 20, 2021 at 10:00 a.m. with a Rosary and Funeral Service to begin at 11:00 a.m. at Mission Park Funeral Chapels South. Interment to follow after the Service at Mission Burial Park South. In lieu of flowers please make a donation to one of the following charities to honor the life of Refugio Vidaurri. Heart Association Cancer Society Diabetes Foundation St. Judes for Childern or any other Children’s Organizations Policemen Donations Firemen Donations

A loving husband, father, brother and friend, Refugio Vidaurri went to be with the Lord on September 2, 2021, at the age of 80, in Atascosa, TX. He was born on July 4, 1941 in Laredo, TX. He is preceded in death by his parents, Felix and Adelaida... View Obituary & Service Information

The family of Refugio Vidaurri created this Life Tributes page to make it easy to share your memories.

Send flowers to the Vidaurri family.