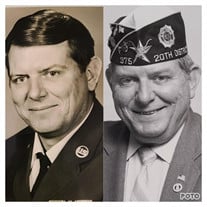 Richard C. Holloway age 82 of San Antonio has been united in Heaven with his parents David C. Holloway and Edith M. Holloway. He is survived by his wife of 47 years of marriage Ethel Jo Holloway, brother David R. Holloway of Dallas, TX, daughter Penny L. Skinner (John) of Mineola, TX, grandson Christopher W. Skinner of Flower Mound, TX, daughter Tracey Thompson (Robert), granddaughter Heather and Kalea Thompson of Sherman, TX. Also his niece Teresa L. Camp (Thomas Sr.) of Lubbock, TX and his great nephew Thomas L. Camp, Jr. (Melissa) and sons Nicholas and Zachary of Lubbock, TX. Rick spent 20 years in the United States Air Force as a Security Police Officer, retiring as a TSgt (E-6) from Brooks Air Force Base. He then worked as Director of Security for IBI Security for the Federal Building in San Antonio, TX. Rick then became a Licensed Texas Police Officer and worked patrol; and a campus officer with NEISD. He retired 2001. He was very active in the American Legion Department of Texas, serving as Department of Texas Vice Commander 2003 -2004, 3rd Division Commander 1999-2000, 20th District Commander 1992 – 1994; he served many years as Post Commander of Arthur Gembler Post 375, where he is a Life Member. Rick is a life member of Davy Crocket Lodge 1225, where he was a Past Master of the Lodge and received his 50 years membership pin in June 2021. He is a life member of Alamo Heights Chapter 734 Order of the Eastern Star, and is a Past Patron. Rick was a proud member of the Alzafar Shrine serving as a driver with the Hospital Corp. Visitation will be held on Sunday, November 21, 2021 from 6:00 p.m. – 8:00 p.m. at Mission Park Funeral Chapel South. Funeral service will begin on Monday, November 22, 2021 at 10:30 a.m. at Mission Park Funeral Chapels South. Interment with military honors will follow at Mission Burial Park South. In lieu of flowers donations may be made to Arthur Gembler, Post 375 the American Legion 9600 S. Presa San Antonio, TX 78223. For personal acknowledgement, you may sign the online guestbook at www.missionparks.com in the obituary section.

The family of Richard Curtis Holloway created this Life Tributes page to make it easy to share your memories.

Richard C. Holloway age 82 of San Antonio has been united in...

Send flowers to the Holloway family.