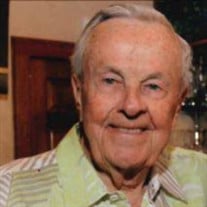 Richard Joseph Schneider, Father, Grandfather and Great Grandfather was united with Our Lord, May 6, 2022. He was born in Cincinnati, Ohio, March 7, 1922, to Carl and Grace Schneider. He was part of the greatest generation, serving during WWII in the United States Marine Corp. Richard was preceded in death by his loving wife Patricia Ann Schneider, parents and his grandson, Jonathan Schneider, great granddaughter, Elisa Patricia Barrera and brother, Carl E. Schneider. He is survived by his beloved children, Richard Schneider II and wife Melissa; Sally Barrera and husband Roy Jr., Diane Lininger and husband Mike; Scott Schneider and wife Cindy; granddaughters, Dawn Galvan(Tom), Marissa Morales(Lawrence); grandsons, Michael Lininger(Brandi), Roy Barrera III(Jaime); Mark Barrera(Abril); Richard Schneider III(Elizabeth), Corey Schneider, Christopher Schneider(Kate), Justin Schneider(Ryan), Stephen Schneider(Cary); and 24 great grandchildren. Dick and Pat owned Trend House furniture and worked side by side for 18 years making many long lasting friendships. He had a great love for the outdoors, his family and playing golf, which led to the annual family Schneider Cup Golf Tournament, which has been held for over 20 years. As his family would say “Dad never met a stranger”. Richard’s commitment to the Lord and devotion to his family, was evident through the way he lived his daily life and the beauty he unknowingly portrayed to all. The love Meema and Boobie had for each other was equally embraced by the entire family. SERVICES The Holy Rosary will begin at 9:00 AM on Wednesday, May 18, 2022 at St. Elizabeth Ann Seton Catholic Church, 8500 Cross Mountain Trail San Antonio Texas 78255 with Mass of the Resurrection to follow at 10:00 AM. Interment will follow at Mission Burial Park North. In lieu of flowers, contributions may be made to You Gotta Want It https://yougottawantit.org/donate, to send children with cancer to summer camp (founded by Boobie’s grandson, Jonathan Schneider).

Richard Joseph Schneider, Father, Grandfather and Great Grandfather was united with Our Lord, May 6, 2022. He was born in Cincinnati, Ohio, March 7, 1922, to Carl and Grace Schneider. He was part of the greatest generation, serving during WWII... View Obituary & Service Information

The family of Richard Joseph Schneider created this Life Tributes page to make it easy to share your memories.

Send flowers to the Schneider family.