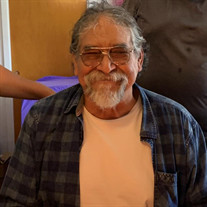 Robert C. Pineda, age 75, passed away at home on Thursday, February 24, 2022 in San Antonio, Texas. He was born on April 11, 1946 in Seguin, Texas to the late Genevevo and Clemencia Pineda. Robert was an outstanding athlete at Luther Burbank High School where he participated in football and track. As an all-star football player he was presented the opportunities to play collegiate football on scholarships. However, he chose to enlist in the US Army where he proudly served his country in Vietnam from 1965 to 1968. Robert enjoyed a long career working as a draftsman and plans checker for the City of San Antonio in the Development Services department where many of his co-workers and clients became lifelong friends. He retired in 1999 and truly enjoyed retirement for over two decades. Robert was a loving dad who always supported his sons, especially when they were into BMX bikes, by driving them to competitions and even constructing an 8-ft quarter-pipe ramp in the driveway of their home. He was always willing to extend his help and support other neighborhood kids during these times. Robert’s world got a lot brighter when he became a grandpa to Catalina Pineda (2009) and Julianna Pineda (2018). He would move mountains for his granddaughters and will now watch over them. Robert is preceded in death by his parents, Genovevo and Clemencia Pineda; sister, Gloria Collins; sister, Hortencia Nanyes and brother, Willie Pineda. He is survived by his brother, Carlos Pineda (Jackie); loving sons, Robert R. Pineda and Roman C. Pineda (Linda); grandchildren, Catalina Pineda and Julianna Pineda; his best friend, ex-wife, Liz C. Pineda; numerous nieces and nephews and so many others who viewed him as a father figure. Robert didn’t have a lot but he gave so much and was always willing to help others. He lived a life of service, never judged anyone and had a big heart. Robert was loved by many and will be deeply missed. SERVICES A Celebration of Life will be held on Saturday, March 19, 2022 at Brookehill Funeral Home beginning at 11am. Veteran Honors will begin promptly at 11am.

Robert C. Pineda, age 75, passed away at home on Thursday, February 24, 2022 in San Antonio, Texas. He was born on April 11, 1946 in Seguin, Texas to the late Genevevo and Clemencia Pineda. Robert was an outstanding athlete at Luther Burbank... View Obituary & Service Information

The family of Robert Pineda created this Life Tributes page to make it easy to share your memories.

Send flowers to the Pineda family.