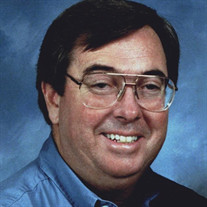 Robert T. Trinkle Jr passed away peacefully from heart failure on January 6, 2022, in San Antonio, TX. Robert was born in Kansas City, MO to Robert Trinkle Sr. and Dorothy Walters. Robert grew up in a Navy family and lived in Kansas, Rhode Island, Tennessee, Texas and Chula Vista, CA, graduating from Hilltop High School. Entering the US Navy in 1965, Robert served his entire Navy career in Kingsville, TX, where he met his wife of 52 years, Earline. The young couple moved to San Diego in 1969. Robert loved sports, particularly basketball and volleyball, but also played softball with the company team. He was fond of all forms of music, and very proud of serving as an Assistant Scoutmaster in Boy Scout Troop 278 for 12 years. He was known for his talent in finding one star movies on television to critique. He may have been one of the first to take selfies on 35 MM film, particularly during Boy Scout outings. Robert was a process engineer in specialized fuse production at Mepco/Electra, Mepcopal, and AEM, all in San Diego, CA. Robert was very proud that his work was used in aerospace applications, especially the Lunar Module, Pioneer spacecraft, and the Mars Rover camera. Robert is survived by his wife, Earline, son Kevin and partner Austin, daughter Kimberly and son-in-law Ubaldo, mother Dorothy, brothers John, Walt and Andy, and sisters Kathy and Stephanie. Services will be held Thursday, January 13 at 2 PM at Highland Park Lutheran Church, San Antonio, TX. Flowers may be sent via the link below. If you prefer, please donate to the Gethsemane Lutheran Church Endowment fund via their website at https://www.gethsemanesd.org.

The family of Robert T. Trinkle Jr. created this Life Tributes page to make it easy to share your memories.

Send flowers to the Trinkle family.