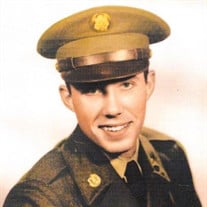 Robert (Bob) Aram Walker was born in Ann Arbor, Michigan, on April 27th, 1935. He graduated from Ann Arbor High school in 1954, shortly after graduation he enlisted in the Coast guard reserve for 2 years. In 1956 decided to enlist in the Army, finishing basic in Fort Leonard Wood, Missouri. He then was stationed in Georgia, Hawaii, Arizona, California, Germany, Washington, Germany and Michigan. He fought in Vietnam for 11 months. He ended his military career on June 2, 1984. Making the decision to move to Texas for warmer climate. Bob and his wife Freida settled in Spring Branch, TX where they would live for 30 years. Bob was the first paid fire chief after years of volunteering. He also volunteered as an EMS tech, served on the board for emergency preparedness, was part of Eastern Star Blanco lodge #934, Alzafar Shiners mini wheels, and the Free Masons. Bob enjoyed going on cruise’s with his wife Freida, they went on their 14th cruise for their 65th wedding anniversary on Aug 11th. He really enjoyed his time with the fire department and being part of the community. He loved to play with the grandkids/great grandkids and loved to talk to his friends and family, mostly on the phone. He loved tinkering with things in the garage and was also known to enjoy a good beverage. He is preceded in death by son; Micheal, daughter; Marlyn, daughter; Diane Reiff and his sister; Lois Combs and sister Beverly Griffin. Bob is survived by his loving wife of 65 years, Freida; 4 children, David Walker of Michigan, Son in law, Jerry Reiff of Texas, Mark Walker of Texas, Bob Walker of Pennsylvania, and Sharon Winn of Texas. He was also survived by his 13 grandchildren; David Walker Jr, Allison Treusch, Emily Walker, Theresa Schmidt, John Schmidt, Heidi Sager, Beth Mahanay, Amy Young, Heather Cleveland, Sarah Walker, Nicholas Walker, Andrea Winn, Angela Winn, 17 + great grandchildren; brother, Aram David Walker; sisters, Barbara Haynes, Dawn Carney, along with other loving family members and numerous friends.

Robert (Bob) Aram Walker was born in Ann Arbor, Michigan, on April 27th, 1935. He graduated from Ann Arbor High school in 1954, shortly after graduation he enlisted in the Coast guard reserve for 2 years. In 1956 decided to enlist in the Army,... View Obituary & Service Information

The family of Robert Aram Walker created this Life Tributes page to make it easy to share your memories.

Send flowers to the Walker family.