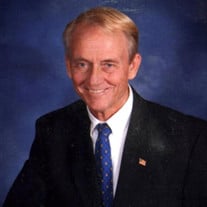 Roger Martin Weed was born February 26, 1943 in the Village of Warsaw, New York to Florence Maxine Martin and DeVere Walter Weed. Roger was raised in Arlington, Texas. Growing up, he was active in several organizations including the Boy Scouts of America. He was an Eagle Scout with two palms and was a Brotherhood member of the Order of the Arrow. At Arlington High School, he played the trumpet in the band. In 2018, Arlington High recognized Roger as a Distinguished COLT. Roger received his BS from UT Arlington in 1964 where he was in ROTC and was a Distinguished Military Graduate. After a year of graduate school at TCU, he married his wife, Mary Carolynn Murchison, on June 19, 1965. In 1965, Roger joined the Army and became an Army Helicopter Pilot. In 1967, he served in the Republic of Vietnam as a Medical Evacuation Pilot where he was responsible for the evacuation of over 1,000 patients before he, himself, sustained wounds during an evacuation. He was not expected to fly again because of a severed radial nerve in his left arm. However, he had a great surgeon, and Roger fooled everyone by his persistence in physical therapy. He was flying again in 5 months. After Roger’s incredible recovery, he served the following year in the Republic of Korea where he participated in the repatriation of the officers and crew of the USS Pueblo. In 1969, after serving 18 months in a combat zone, Roger left active duty. He then entered the University of Texas Dental Branch in Houston while he continued flying helicopters in the U.S. Army Reserves. He remained in the reserves as a dentist until he retired as a Colonel in 2003. After graduating dental school in 1973, Roger opened his private practice in Arlington. Within that year, he also became a part-time faculty member at Baylor College of Dentistry in the Department of Operative Dentistry. In 1975, he reduced his private practice schedule and assumed 3 part-time positions at Baylor College of Dentistry. This led him to accept a position in 1977 at The University of Texas Health Science Center in San Antonio, Dental School. After more than 40 years of academic teaching, research and service, Roger retired from UTHSCSA as an Associate Professor with Tenure in 2018. During his career at UTHSCSA, Roger’s students chose him on 6 different occasions as “Teacher of the Year”. In addition, he was awarded the “Outstanding Clinical Teaching Award” by the Dental School Faculty on 3 different occasions. He is listed in the 4th edition of “Who’s Who Among America’s Teachers”. He served as a member or Chair of more than 25 different Institutional Committees. He authored or co-authored more than 40 articles, editorials and abstracts. He received several grants and contracts from local and national sources and his research findings were presented at various national and international meetings. Roger’s Military decorations include the Legion of Merit, Distinguished Flying Cross, Bronze Star Medal, Purple Heart, nine Air Medals, Vietnamese Gallantry Cross with Silver Star, two Meritorious Service Medal, seven Army Commendation Medals, two Army Achievement Medals, U.S. Army and Vietnamese Unit Commendation Medals, Combat Medics Badge, and Army Aviator Badge. He has also received the prestigious Order of Military Medical Merit from the U.S. Army Medical Regiment. He was a 1990 graduate of the U.S. Army War College and was a life member of the Reserve Officers Association, Disabled American Veterans, Dustoff Association, Vietnam Helicopter Pilots Association and the Army War College Alumni Association. Roger had a long standing commitment to organized dentistry and was a Life Member of the American Dental Association, Texas Dental Association, Fort Worth and then the San Antonio District Dental Societies. He was also a member of the American Association of Dental Schools and was a Fellow of the American College of Dentists. In 2019, he was presented with the first Lifetime Achievement Award by the San Antonio District Dental Society in recognition of his excellence in teaching and promoting organized dentistry. Roger and Mary were married nearly 57 years and have two daughters, Stacy Free (Richard) and Kayla (deceased), and two grandsons, Austin and Travis Henk.

Roger Martin Weed was born February 26, 1943 in the Village of Warsaw, New York to Florence Maxine Martin and DeVere Walter Weed. Roger was raised in Arlington, Texas. Growing up, he was active in several organizations including the Boy Scouts... View Obituary & Service Information

The family of Roger Martin Weed created this Life Tributes page to make it easy to share your memories.

Send flowers to the Weed family.