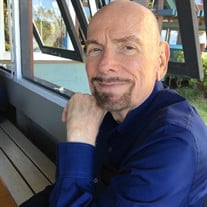 On Monday, November 29, 2021, Ronald Lee Dixon, 79 of San Antonio and Arlington, VA, went home to be with the Lord and his beloved parents Durward Milton (Bob) Dixon and Ruby Dale Brigman Dixon after a battle with cancer. Ron passed peacefully surrounded by love in his hometown of San Antonio. He was a member and Deacon of Trinity Baptist Church where he was baptized and President of the Trinity Chorale where he participated with his mother never missing a rehearsal or presentation until she was no longer able. When Ron sang solo, to the congregation, his love of God was evident and often there wasn’t a dry eye in the house. Ron went to Jefferson High and thereafter, graduated from the University of Texas at Austin with a degree in Broadcasting. From the 1960’s to the 1970s, Ron was the creative genius at The Atkins Agency. His unlimited creativity led him to run major ad campaigns and commercials for San Antonio clients and the city itself. Some of his spots won prestigious CLIO Awards, which are the equivalent to Academy Awards for commercials. Not only was he an outstanding ad producer, but he was also a comedic host known as “Bidmaster Ron” on a local Saturday morning TV series His personality was always upbeat and jovial. During the 1980's, Ron was one of the founders of the ACTS (American Christian Television System). He was in charge of production at this national television network which is still in operation today as "Hallmark Channel". In 1990, he and a group of partners bought a cable TV network from Hollywood called "Silent Network" and expanded it in San Antonio. Additionally, a second network was launched called "America’s Disability Channel" which then evolved to become "Kaleidoscope Television." This national network was seen in 17 million households across the USA and Canada and won several awards. The network is still in operation today as "Silent Network," thus continuing Ron’s work. In addition to Ron's TV work, he also served on the San Antonio Mayor’s Committee on People with Disabilities to help improve the lives of people with disabilities in the city. He subsequently held executive positions in health-oriented non-profits in Arlington, VA including Health Charities and National Alliance on Mental Illness (NAMI). It was in Arlington where in 2004, he met who would become his partner for the rest of his life. Ron was selfless. He gave of himself with full measure through his involvement with Trinity Baptist and the chorale there as well as the Baptist Convention, following a calling there. When there was a downturn in his business at one point, he continued to pay his employees out of his own pocket as he didn’t want circumstances to adversely affect them and their families. And speaking of families, he dearly loved and cared for his extraordinary parents and significantly, his mother for many years, eventually, selflessly, expending all the remainder of his resources for medical care in her later years. Ron is loved and remembered for his sparkling, quick wit, his infectious laugh, his ability to make every colleague and friend feel important, and his many contributions to the communities he served. Ron was well loved in life, and is survived by his beloved partner, Gene C. Smith, his sister Bobbie Dale Giffen, his nephews Russell Mark Giffen and Robert Lee Giffen, his cousin Carolyn Morgenthaler and his cousin Gene Brigman. Ron was laid to rest next to his parents in the Chamber Chapel Mausoleum at Mission Park North Cemetery after honors recognizing his service in the U. S. Army and a service dedicated to his love of God and the love of those dearest to him.

The family of Ronald L. Dixon created this Life Tributes page to make it easy to share your memories.

Send flowers to the Dixon family.