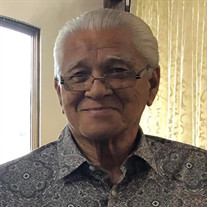 Rudy (“Dad”, Ropo) De La Rosa, peacefully passed into the arms of our Lord on February 14, 2022 at the age of 87, following a very brief battle with cancer. A loving husband, father, grandfather, and great grandfather, “Dad” was surrounded by his three loving daughters and grandson on the day of his departure. He is preceded in death by his loving wife Gloria De La Rosa (Mom), his parents Agapito M. and Eldefonsa (Gonzalez) De La Rosa, his brothers Paul, William (Memo), Louie, and his sisters Ino De La Garza, and Olga Cortez. “Dad” is survived by his brother Agapito and sisters Gloria Flores and Carrie Maes; his daughters Cindy Skruhak (Dennis), Nancy De La Rosa, Laura Wildman (Doug); three grandsons Nick De La Rosa (Margarita), Michael Wildman Jr. (Felicia), and Jonathan Wildman; four granddaughters Sarah Lestourgeon (Bryan), Heather Wildman, Kelsey Pina (Brian), and Jordan Skruhak; and twelve great grandchildren; Michael III, Sophia, Nathan, Damien, Wylie, Adrien, Bobby, Laila, Tobias, Noah, Benjamin, and Bradley. The family will cherish the loving memories they all shared with their “Dad”; family vacations and celebrations, his never ending strength, and especially the laughs they shared as gifts of his jokester personality that kept them laughing until his last days. Although they are mournful for their loss they all know in their hearts that “Dad” chose to leave on the special day of Valentines so he could join his sweetheart in heaven. The family would also like to thank all the wonderful family and friends who reached out during this very difficult time. They also extend their deepest gratitude to all the passionate caregivers who shared themselves with their beloved “Dad”; especially Amedisys Hospice Care who lovingly helped the family care for him the final weeks of his life. A special heart-felt thanks to all of those who prayed and meditated peaceful vibes that allowed “Dad” to begin his peaceful journey to his eternal home.

The family of Rudy De La Rosa created this Life Tributes page to make it easy to share your memories.