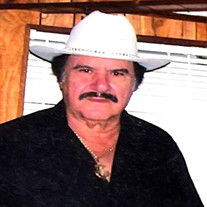 Samuel G. Talamantez (89) was born August 23, 1932 in Floresville, TX. He went to be with our Lord on December 24, 2021 in San Antonio, TX. He was preceded in death by his parents, Jesus and Sophia Talamantez, brothers, Simon Talamantez, Jesus... View Obituary & Service Information

The family of Samuel G. Talamantez created this Life Tributes page to make it easy to share your memories.

Send flowers to the Talamantez family.