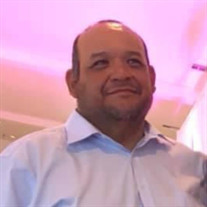 Sergio Albert Gonzalez-Ruiz, age 48, of San Antonio, left this world suddenly in the afternoon hours of Sunday, September 19, 2021. Sergio was born on December 27, 1972 in Monterrey, Mexico to the late Pascual Gonzales-Davila and Maria de Jesus Ruiz-Chavez. Sergio grew up in Mexico where he learned early in life skills that would help him be a provider for his family throughout his life. Sergio married the love of his life and his best friend, Veronica Bustos-in San Antonio, Texas. Together they would spend the next 28 years raising four children, sharing countless laughs, and creating a lifetime of memories that will live on for generations to come. Tragically, Veronica preceded him in death on August 21, 2021 leaving behind many to grieve the loss of both Sergio and Veronica. Sergio was a jack of all trades but was best known for his welding and mechanical skills. He worked for L&M Metal Supply for 15 years before becoming a mechanic at the Martin Marietta – San Pedro Quarry. Sergio attended Iglesia Bethel for 15 years where he and his family worshipped and grew in their faith as a close knit family. Those who knew Sergio best will remember a loving husband, father, and grandfather who put nothing before his family and would do whatever he needed to provide all he could for them. Sergio was a genuine soul whose smile would light up a room. When Sergio wasn’t working or tending to the needs of his family, he would most often be found roaming the aisles of Lowe’s or Home Depot trying to finish any one of his many projects or at the dinner table enjoying whatever his beloved wife prepared for the day. Sergio leaves behind a legacy of love for his family, dedication to his Lord, and a love for hard work and working with his hands that will live on in the hearts of those he leaves behind for generations to come. Sergio is survived by four children, Destiny Torres, and husband Juan, Sergio Gonzalez, Jr., James Gonzalez, and Sophia Gonzalez; one grandson, Ethan; one sister, Maria Rodriguez; two brothers, Luis-Carlos Gonzalez-Ruiz and Ignacio Gonzalez-Ruiz; and by a host of other relatives and very special friends. Sergio was also preceded in death by one nephew, Anthony Moczygemba. Private family services will be held at Mission Park Funeral Chapels.

The family of Sergio Albert Gonzalez-Ruiz created this Life Tributes page to make it easy to share your memories.

Send flowers to the Gonzalez-Ruiz family.