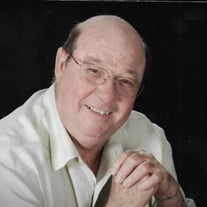 Terry Lyn Wolf joined his Lord on March 7, 2022 in San Antonio, Texas. He was born on January 24, 1945 in Killeen, Texas to Francis Marion Wolf and Hattie Irene Brookshire. Terry was preceded in death by his parents; and his sister, Jimmie Maxine... View Obituary & Service Information

The family of Terry Lyn Wolf created this Life Tributes page to make it easy to share your memories.

Send flowers to the Wolf family.