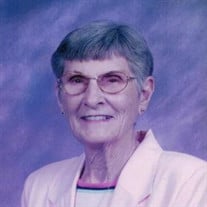 Thelma June (Beard) Reed, 95, of Somerset, Texas went home to be with her Lord on September 16, 2021. She was born June 18, 1926, in Somerset, TX. She was preceded in death by her husband, John Reed, parents Lem and Grace Beard, brothers William Frank Beard and Bennie Norman Beard, sister-in-law Pauline as well as all of John’s siblings and their spouses and five nephews. She graduated Somerset High School in 1943 and then Draughon’s Business School in 1944/45. She moved to San Antonio where she met John during World War II when he trained for the Army Air Corps at Lackland. They married in 1946 and lived in San Antonio until early 1977, when they built and moved to their forever home on her family’s farm in Somerset. She worked for a San Antonio builder during and after the war and prior to the arrival of their children. She joined USAA in 1962 and retired in 1985. Thelma and John loved to visit family and serve them as well as others when help was needed. They loved to travel and visited all 50 of the United States and parts of Canada. Thelma and John were very active in their church and serving the Lord with their church families as well as the charities and causes they supported. Thelma was a great conversationalist, the family historian (given her incredible memory) and had a wonderful (if sometimes wry) sense of humor. She thoroughly enjoyed living life with her boys, grandchildren, siblings, and other family members. She enjoyed crossword puzzles, live music, plays, movies, musicals, Ice Capades, rodeo, and Night In Old San Antonio. She is survived by her sons: John Timothy (Terri) of Houston, TX, and Jeffrey Paul ( Shirley) of Spring Branch, TX. grandchildren Lauren Prather (Scott) of Waco, TX; Kendall Reed (Stephanie) of Dale, TX; Jessica Fellows (Chase) of San Antonio, TX; and Sarah Reed of Dallas, TX, Great Grandchildren Will Prather, Claire Prather, and Wyatt Fellows, sister-in-law Anita Beard, nephew Randy Beard (Cindy), as well as many other nieces and nephews. Visitation will be held at 5 PM on October 8, 2021and Celebration of Life will be held on October 9, 2021, at 9:30 AM at Mission Park Funeral Chapel South. Please see the Mission Park Funeral Chapel South website for details. Interment will follow the Celebration of Life at San Fernando Cemetery #3. In lieu of flowers, the family invites you to donate in her memory to the Christian Homes and Family Service (christianhomes.com). The family thanks Gruene Senior Living, Hope Hospice of New Braunfels, and Doris Herrera (in home care giver) for all their love and care these past several months and days. Thelma wants you to know that God Loves You and So Did She. John 3:16 “For God so loved the world that He gave His only begotten Son, that whoever believes in Him shall not perish, but have eternal life.”

Thelma June (Beard) Reed, 95, of Somerset, Texas went home to be with her Lord on September 16, 2021. She was born June 18, 1926, in Somerset, TX. She was preceded in death by her husband, John Reed, parents Lem and Grace Beard, brothers William... View Obituary & Service Information

The family of Thelma June Reed created this Life Tributes page to make it easy to share your memories.

Send flowers to the Reed family.