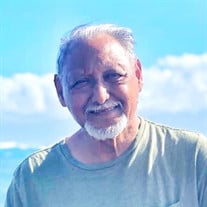 Tomas Yanes Rangel was born December 21, 1948 in Fentress, Texas and passed away on October 20, 2021 at the age of 72. He graduated from Harlandale High School in 1968; years later, he went on to attend Palo Alto College where he made the deanʻs list in his first semester. Tomas was a diehard sports fan who loved the Dallas Cowboys and the San Antonio Spurs. He also coached Pop Warner Football as well as CYO Basketball at St. Leoʻs Catholic Church. An avid runner, he completed the Beach to Bay Relay marathon multiple times and was running over 30 miles a day when he met his wife, Cecilia. He worked as a security guard in numerous department stores but he truly cherished his time working for Academy Sports and Outdoors managing the Shoe Department and playing for their corporate baseball team. One of his favorite memories was representing his employer and having the honor of throwing the first pitch at a San Antonio Missions Baseball game. When he wasnʻt watching sports, westerns or training for his runs, he would spend his spare time playing the trumpet which he started playing in the Harlandale High School Marching Band. He was a trumpet player for numerous Tejano bands and played at various venues in and around the San Antonio area. In his later years Tomas enjoyed spending time with his wife Cecilia in their garden at home. They enjoyed going for walks along the San Antonio River, sightseeing and exploring new places along the way. Tomas was especially fond of their extended vacations and creating new memories with family. Competitive by nature and a true jokester at heart, he left his family with countless fond memories that will be cherished forever. He is preceded in death by his wife Cecilia, his parents Jose and Lydia Rangel and older sister Maria Aurora Rangel. He is survived by his only son Tomas Jose Rangel, daughters Melissa Andrea Gutierrez and Sarah Jo Ching, daughter- in- law Huong Nguyen Rangel, sons- in-law Adrian Gutierrez and Josiah Ching; his sisters Maria Aurora Reyes, Diana (Robert) Vargas, Velma (Frank) Uriegas, and Annie (Andy) Ponce; grandchildren Tomas Jose Rangel II, Jazmine Maldonado, Adrian Gutierrez Jr, Chloe Gutierrez, Aiden Gutierrez, Andrew Gutierrez, Auli’i Ching, Kia’i Ching and numerous nieces and nephews. Services for Tomas will be held at Mission Park Chapels South, 1700 SE Military Dr, San Antonio, TX 78214. Visitation will be Sunday November 7 from 5-8 p.m. with the rosary to begin at 6 p.m. Funeral service will be at Mission Park Chapels South on Monday November 8, 2021 at 11 a.m. Interment will follow at Mission Burial South.

Tomas Yanes Rangel was born December 21, 1948 in Fentress, Texas and passed away on October 20, 2021 at the age of 72. He graduated from Harlandale High School in 1968; years later, he went on to attend Palo Alto College where he made the... View Obituary & Service Information

The family of Tomas Yanes Rangel created this Life Tributes page to make it easy to share your memories.

Send flowers to the Rangel family.