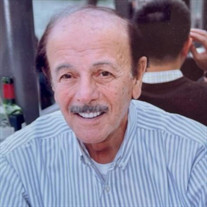 Walter Muslin passed on January 17, surrounded by his family and loving companion Cara. He is preceded in death by his wife Donna, parents Mile and Anne Muslin, and siblings Millie (last name), Mark Muslin, Rudy Muslin and George Muslin. He is survived by his children Walter Muslin spouse Barbara Cosri, Greg Muslin, and Michelle Muslin Lipari spouse Steve Lipari and grandchildren Anton Langer, Kristin Muslin, Jacqueline Muslin, Alexa Mason and Ava Mason. Also survived by his companion Cara Thomas and his beloved dog Shay. Walter was born on June 11th, 1934 in Aliquippa, PA. In his youth he enjoyed hunting and sports, excelling at baseball. As a young man he proudly served in the Army. Walter married Donna in 1958, settling in Aliquippa, and welcoming three children. He worked for Jones and Laughlin Steel retiring in 1982. A job opportunity for Donna led them to San Antonio, TX in 1984. Not ready for retirement, he worked as plant manager for Crane Industries. Eventually, trading in hard hats for briefcases, as a sales representative with Flexible Foam until retirement in 2016. In 2016 Donna passed and Walter moved closer to family in Boerne, TX. Here he spent his time enjoying retirement, golfing, training Shay, being the hang-out place for his granddaughters soccer team and finding new love and companionship with Cara. Walter’s life was extraordinary in a quiet way. The unprecedented legacy he leaves behind in all whose lives he touched is a testament to the remarkable man he was and how much he will be missed. A celebration of his life will be held on February 19 at 11:00AM at Covenant Presbyterian located at 211 Roleto Drive, Castle Hills, TX. Donations can be made to Habitat for Humanity at https://www.habitat.org/

The family of Walter Muslin created this Life Tributes page to make it easy to share your memories.

Walter Muslin passed on January 17, surrounded by his family...

Send flowers to the Muslin family.