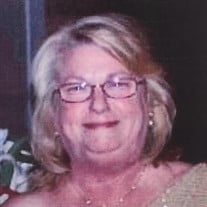 Wilhelmina (Willa) Marie Bowles December 22, 1946 – May 10, 2022 Wilhelmina “Willa” Bowles was born in Huntington, New York on December 22, 1946 and passed away on May 10, 2022 at the age of 75. She is preceded in death by her parents Edgar and Lucille Blackledge; husband William (Bill) Bowles, and step-daughter, Melissa Jane Bowles. Survivors include her best friend and companion Harry Young, with whom she reconnected after she was widowed in 2005; six stepchildren from her husband Bill, including Elizabeth, Karen, Ben (Tiffany), Jennifer (Federico), Amy, and Daniel (Erica); brothers Edgar Blackledge (Susan) and Covert Blackledge (Kim); and numerous grandchildren. Willa graduated high school from Bryan High School in Bryan, Texas and went on to study Art at Stephen F. Austin State University in Nacogdoches, Texas. She then moved to San Antonio where she worked for over twenty years at the Methodist Hospital in various positions, making contributions as a photographer and graphic artist. During this time, she bravely took on the role of step-mother to seven children, providing much support and guidance. Later she continued on working in the library at Texas State University. She happily retired in 2013. Willa was a passionate musician, playing both clarinet and contrabass clarinet. She was a longtime member of the Beethoven Concert Band where she met her husband, Bill. She was also a member of the Comal Community Band and other ensembles local to the San Antonio area. Since 1996 Willa enjoyed country life in Kingsbury, Texas and was a great lover of animals, caring for many beloved cats and dogs throughout her life. She loved to laugh, make jokes, and tell stories. She spent her evenings watching her favorite shows and never missed the chance to go shopping. Always up for a party, she enjoyed many lifelong friendships. Willa’s laughter and jovial spirit will be missed by all who knew her. Visitation will begin on Friday, May 13, 2022, at 1:00 p.m. with the funeral service to begin at 2:00 p.m. at Mission Park Funeral Chapels South. Interment will follow at Mission Burial Park South. For personal acknowledgement, you may sign the online guestbook at www.missionparks.com in the obituary section.

The family of Wilhelmina (Willa) Marie Bowles created this Life Tributes page to make it easy to share your memories.

Send flowers to the Bowles family.