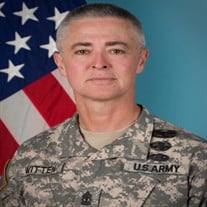 Willard Kint “Will” Witten husband of former Cotulla resident Kathleen Marie Pena-Witten died suddenly and unexpectedly Wednesday December 22, 2021, at the age of sixty-one (61) years. Will, a retired Army First Sergeant was born on February 27, 1960 in Bangor Maine. As the son of a career USAF Non-Commissioned Officer, he was raised in multiple locations around the world. Will was a patriot who served his country in uniform for over twenty (20) years. Will enlisted in the Army shortly after graduating high school and served on active duty for a short time before joining the reserves. Will eventually moved to San Antonio and started work as a licensed vocational nurse. While working at RIOSA rehabilitation hospital he met his future wife Kathleen Marie Pena. Together, Will and Kathy worked in the nursing profession for several years when in 1998 Will decided to re-enlist in the Army. Will was assigned to the 10th Mountain Division in Fort Drum, NY and transitioned to the reserves just before the September 11, 2001, attacks on the Twin Towers. After 9.11 he was called to active duty where he spent the rest of his military career. Will served multiple tours of duty in Iraq and Afghanistan, was severely wounded in combat and received the Purple Heart. 1SG Witten was awarded the Bronze Star, Legion of Merit and numerous other medals and awards. Will, accompanied by his wife Kathy, was stationed around the country including Fort Drum, NY (10th Mountain Division), Fort Bragg, NC, Fort McPherson GA, Fort Hood, TX, Fort Sam Houston, TX, and others. Like many combat veterans, Will was deeply affected by his war experiences. He generously gave back to fellow veterans by his involvement in the Wounded Warrior Project and other veteran support groups. Will cared deeply about the men and women who serve our country. Will became a Christian after a near-death experience in war. He tirelessly served his country and volunteered to deploy to combat zones even though he could have avoided front-line service. Kathy and Will had one (1) son Gunner Travis Witten. Gunner, like his dad, joined the Army Reserves in 2021 and completed basic training in January 2022. Gunner was the light and joy of his father’s life. Will found solace in spending time with his wife and son, good music, and traveling. If Will had one wish that he could impart after his death, it would probably be that all Americans give thanks each day for the military men and women who serve our country in places near and far. At his core, Will was a soldier and family man. He would likely wish to be remembered as a good husband, father and humble soldier who faithfully did his duty. Will was predeceased by his father: James A Witten; he is survived by his wife Kathy and son Gunner, Mother Hilda M. Witten, sister Kibby Lynn Carr; close friends Travis O’Rourke, Reggie Williams; numerous in-laws, nieces, nephews, and the San Antonio veteran community. - In lieu of flowers, memorials may be made in the name of Willard K. Witten, 1SG USA (Ret.) to Wounded Warrior Project - San Antonio, or the veterans’ group of your choice. 1SG Witten will be interred at Arlington National Cemetery, VA; funeral services are under the direction of Mission Park Funeral Chapels and Cemeteries.

The family of Willard Kint Witten created this Life Tributes page to make it easy to share your memories.

Send flowers to the Witten family.