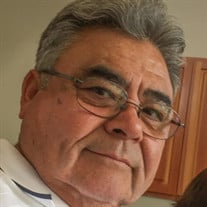 PLEASE MAKE NOTE THAT THE LOCATION OF THE VISITATION AND THE ROSARY HAS BEEN CHANGED TO DELLCREST FUNERAL HOME. 2023 SOUTH W.W. WHITE ROAD, SAN ANTONIO, TX 78222. (210) 337-4082. Zeferino Guadalupe Villela, age 71, of San Antonio, passed away peacefully in the early afternoon hours of Tuesday, October 26, 2021 at University Hospital in San Antonio after a heroic battle with cancer. Zeferino was born on October 28, 1949 in Monterrey, Mexico to the late Juan Herrera and Rubina Chapa Villela. Zeferino graduated from Harlandale High school where, as a senior, he started dating a young lady named Rebecca Gutierrez. Zeferino and Rebecca quickly found a love that only comes along once in a lifetime. Between classes, going to dances, and riding in the car with Zeferino always singing, Rebecca knew she had her one and only. Zeferino and Rebecca were married on August 8, 1971, in a double wedding with Zeferino’s sister and would be lifelong brother-in-law. Together Zeferino and Rebecca have spent the last 50 years raising two children and three grandchildren, and sharing countless tears and laughs all while creating a lifetime worth of memories that will live on in the hearts of those he leaves behind. Those who knew Zeferino best might describe him in one powerful word - dedicated. Zeferino knew as a senior in high school that he would spend the rest of his life with his “older woman” (by 26 days). After graduating from St Mary’s University, he began a job at Walgreens that through hard work and a relentless spirit would turn into a career spanning more than 4 decades. Zeferino was a man whose relationship with the Lord has been instilled in the fabric of his family. Throughout his life, Zeferino had a passion for golfing and fishing and was a devoted fan of the Dallas Cowboys and the Texas Longhorns. As he approached retirement, he built his beloved bride their dream home in Rockport. There are so many happy memories of countless fishing lessons turned life lessons with his beloved grandsons. Zeferino’s grandsons were the force that kept him going in his last chapter and where he was the happiest- traveling every weekend to basketball games and soccer matches, fishing, or just spending time with his beloved boys being their Papo. Zeferino leaves behind a legacy of dedication to his family, his career and his God that will be the path to success for generations to come. Zeferino is survived by his loving wife, Rebecca; one son, Marcos Anthony Villela of San Antonio; one daughter, Leticia Villela Smith, and husband Preston Blaine, of Austin; grandsons, Noah, Lucas and Max Smith; one sister, Janie Cardenas, and husband Carlos, of Baytown; one brother, Jesus Villela of San Antonio; three sisters-in-law, Angie Villela, Barbara Villarreal, and Teresa Gutierrez, and spouse Shelley, and by a host of nieces, nephews and other relatives and very special friends including the Suarez Family. Zeferino was also preceded in death by two brothers, Francisco Villela and Jorge Villela, and by one sister, Francisca Villela. Visitation will be held from 5-8 pm, Wednesday evening at Dellcrest Funeral Home, 2022 South W.W. White, San Antonio, TX 78222, with a Rosary at 6:30pm, under the direction of Deacon Mark Luther. The Funeral Mass for Zeferino G. Villela will be held at 10:30am, Thursday, November 4, 2021 at St. Leo’s Catholic Church. 4415 S. Flores, San Antonio, TX 78214 under the direction of Father Frank Macias. The family will receive friends at the funeral home beginning at 9am, Thursday morning with a procession to the church at 10am. Burial will follow at Mission Burial Park - South. 1700 S.E. Military Drive, San Antonio, TX with Juan-Carlos Cardenas, Armando Gomez, John Herrera, David Suarez, Joe Valle, and John William Villela serving as pallbearers.

The family of Zeferino Guadalupe Villela created this Life Tributes page to make it easy to share your memories.

PLEASE MAKE NOTE THAT THE LOCATION OF THE VISITATION AND THE...

Send flowers to the Villela family.