'Everybody is somebody': SA funeral home volunteers to give 53 migrants dignified burials

When all the deceased are identified, a local funeral home is offering their services to help bury each migrant in their home country.

A San Antonio business is stepping in to help ensure the victims' families will be able to bury their loved ones. Mission Park Funeral Homes and Cemeteries says it will use its resources to help the Bexar County medical examiner. It is working with county and local officials to help with caskets and paperwork for the 51 victims.

After the mass school shooting that killed 19 children and two teachers, two funeral homes are helping the families affected. Rushing-Estes-Knowles Mortuary and Hillcrest Memorial Funeral Home have announced they'll be offering free funeral services for all the victims.

On Thursday, January 13, owner of a San Antonio funeral home, Robert "Dick" Tips, made his debut on the popular meme page @foosgonewild. The clip is a excerpt from an iconic San Antonio-area advertisement for Tip's end-of-life business.

Mission Park Funeral Homes official said they've had a 50% rise in funerals because of the COVID-19 pandemic. In many cases, involving a lot of families that were not expecting to bury someone so young. "So many people never experienced a pandemic or experienced having to have a funeral service this unexpectedly so to be able to have some resources to come back to you it’s a beautiful thing," said Dick Tips, CEO, Mission Park Funeral Homes.

As society has grappled with the collective trauma of thousands of deaths due to COVID-19 in Texas, and across the country, those working in funeral homes and cemeteries continue to help families grieve. Kristin Tipps with Mission Park Cemetery considers herself a “last responder.” Her job is to help families with their final resting spot. 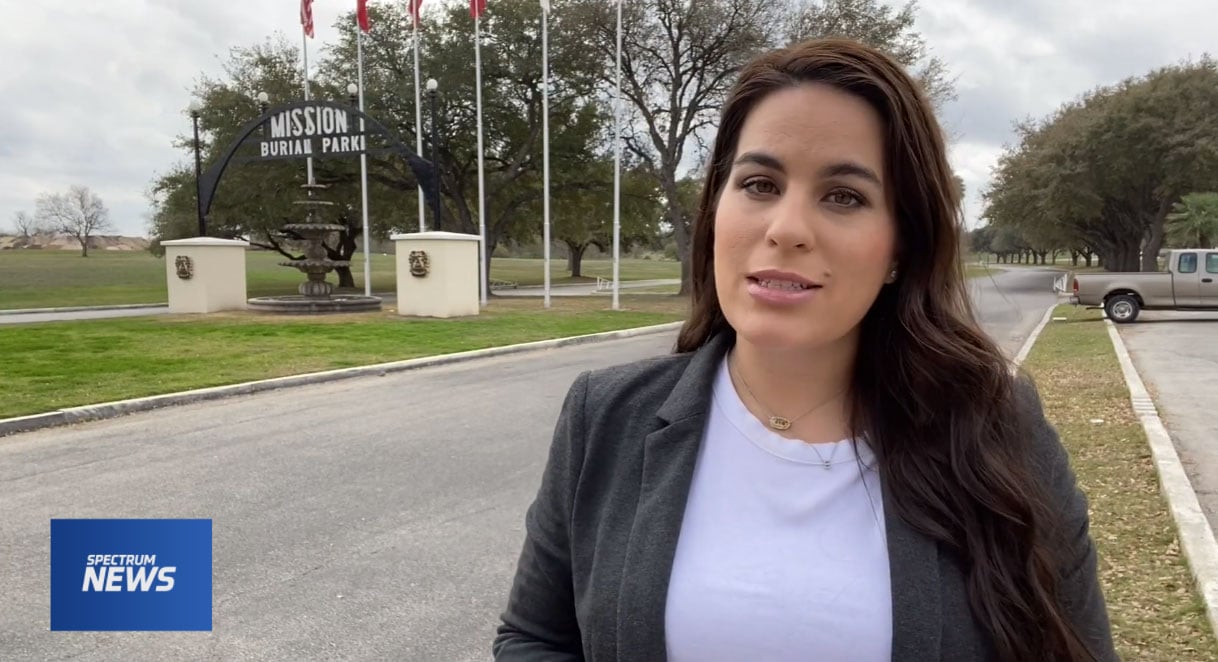 We caught up with this thirty-something lady whirlwind, who together with her husband Dick Tips, is reinventing funeral services during a national pandemic and dramatically expanding one of the largest family owned funeral businesses in Texas. Kristin’s story of becoming a funeral director in her twenties and then a statewide funeral commissioner appointed by Governor Greg Abbott to help shape the future of funeral services in Texas, is all about overcoming challenges and following your heart. Read more. 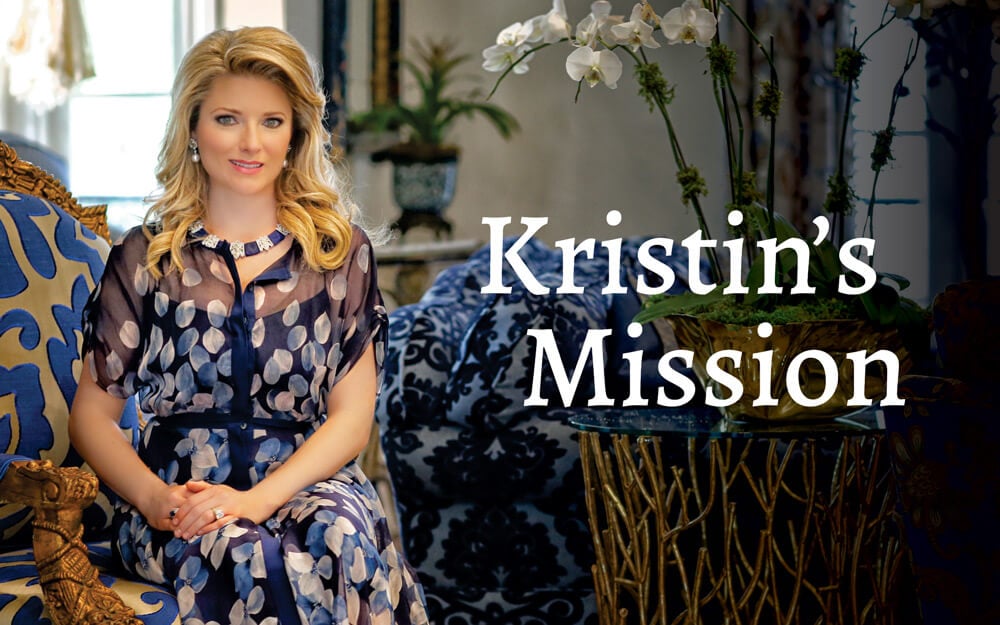 Country music legend Johnny Bush died recently at the age of 85. He was honored in a video tribute put together by Mission Park Funeral Chapels which you can see here: https://www.youtube.com/watch?v=GsUcvXd8occ. Bush was born in Houston, but at 17 he burst onto the music scene in San Antonio, playing on the radio and at the old Texas Star Inn on Bandera Road. When a band he was in needed a new guitarist, they happened to hire a young singer named Willie Nelson, who would become a lifelong friend. But just as his career was on the way up, he suddenly lost his voice. Completely. He couldn't sing or even talk. Read more.

Mission Park Cares: In The Community

To view past episodes, visit our YouTube channel: https://www.youtube.com/user/MissionParkFuneral/videos

In 1918, as the Spanish Flu pandemic took the lives of 881 people in San Antonio, the founder of a local funeral business wrote a message on the pages of a family Bible. Will Chambers told of “troubling and difficult times where we are saddened to avoid public spaces” and preparing for a “formidable adversary.” In March, his descendants, the owners of Mission Park, took those words to heart and began preparing for a modern-day pandemic that has taken the lives of 298 residents in San Antonio, with no clear end in sight. “It’s all come true,” said Mission Park CEO Dick Tips of his great-grandfather’s writings. Read more.

A somber procession for Bexar County Sheriff's Deputy Timothy De La Fuente made its way Tuesday morning from Mission Park Funeral Chapels South to Community Bible Church on the North Side for a ceremony with full honors.

When Robert “Dick” Tips’ great-grandfather bought land on the South Side of San Antonio that would become Texas’ first perpetual care cemetery, he also bought a family Bible. In it, Will H. Chambers wrote words of wisdom to his wife, for whom he bought the land as a wedding gift in 1907. His jottings include observations on how to get through tough times, including the annus horribilis of 1918, when the Spanish flu killed an estimated 50 million people worldwide and more than 880 in San Antonio

After learning about the situation, the owner of Mission Park Funeral Chapels, Dick Tips, has offered to re-locate their pets and headstones free of charge, to a pet cemetery he maintains at Mission Park South.

“We would like for them to have a new home and we'll relocate the three or four that you have already visited with and have them come out here and as long as there's a granite memorial then we're not going to charge them a thing,” said Dick Tips, Mission Park Funeral Chapels, Cemeteries & Crematories. Read more.

For families seeking to make funeral arrangements, finding closure with a funeral might not be possible for a while. But a San Antonio funeral home found a way to stay safe and provide for grieving families. “Not comparable to the drive-in we would go to when we were little," said Curtis Hampsten, longtime friend and employer of Ray Ybarbo. Throughout this pandemic, up to three times a day, cars drive up to the Mission Park Funeral Home to look up at a huge LED screen and tune into the radio. “It was almost just like being in the chapel with them," said Brian Ybarbo, Ray Ybarbo's nephew. Read more.

As the novel coronavirus outbreak continues to keep lockdowns and social distancing measures in place across the US, a funeral home in San Antonio has started offering a new service to ensure mourners can still say bid their loved ones a proper farewell.

Mission Park Funeral Chapels and Cemeteries became the first in the world to announce plans to open a drive-in theater earlier this month - and one of the first of the unique services was held outside their chapel on Tuesday morning. Read more.

A San Antonio funeral home erected a huge cross Friday in honor of people who have died of the coronavirus across the country. Mission Park raised a 50-foot cross weighing 3 tons on the grounds of Mission Park South in the 1700 block of Southeast Military Drive.

According to a news release, the reason behind the large cross was to make it possible for visitors to Mission Park to pay their respects this Easter without the need to leave their vehicles. Read more.

Dick Tips has two jobs; Owner at Mission Park Funeral Chapels and Milk Man. He started the second job as the COVID-19 pandemic began to surge and people began to hoard things like milk, cheese and eggs.

"People were taking a little too much that I don't think they could possibly use and I wanted to get it to people who could really use it, really need it and who deserved it," Tips said.

It didn't take long for Tips to work the phones and find out how to buy more than 3,000 gallons of milk, which were delivered on an 18-wheeler from Tyler, Texas. Read more.

When the Texas Department of Transportation decided to widen Highway 281 in San Antonio, Dick and Kristin Tips, owners of Mission Park Funeral Chapels and Cemeteries, were informed that the state of Texas would be exercising its right of eminent domain. The state’s taking meant that the Tipses’ funeral chapel alongside the highway would have to come down.

The Tipses acquiesced to the state’s highway expansion plans so as not to get in the way of progress. But instead of abandoning San Antonio’s Northside altogether, Dick and Kristin set out to build a new facility to serve the needs of families in that area. Out of the razing of one came the construction of another—a new “Life Center”—in conjunction with a new philosophy that focuses on the meaning and value of life’s many celebratory moments. Read More.

You may also read additional information from the following local community sources:

Our Women of San Antonio award features women who make a positive impact on lives in San Antonio, and this month, we have a new recipient of the award- President and CEO of Child Advocates San Antonio (CASA), Marina Gonzales. Here to help present the award are Kristin and Dick Tips from Mission Park Funeral Chapels and Cemeteries. Read more.

More than 100 participants ran through the Mission Park Cemetery in south San Antonio to honor their loved ones who have passed away. The Celebrating Life 5K Run and Walk is part of the city's three-day celebration for Day of the Dead. Watch Video.

It’s All About Life | Kristin Tips: Serving Others with Compassion and Grace

As soon as you meet Kristin Tips you immediately learn she’s the mother of twins, she’s married to the love of her life, and she’s a funeral director.

While that might seem like an unexpected career, it’s a profession that she’s passionate about. You can’t help but feel the pride in her voice when she describes the long family tradition of women taking leading roles in this family-owned funeral business.

“Believe it or not, Mission Park is really a love story. Our history in San Antonio goes back to 1890 when my husbands’ great grandfather, Will Harry Chambers bought his wife Clara Mahone Chambers a unique wedding gift… acres of undeveloped land on the banks of the San Antonio River.” Read more.

San Antonio-based funeral chain Mission Park Chapels & Cemeteries has gone green after installing solar power at seven of its locations — adding around half a megawatt of green energy to the grid. Read more.