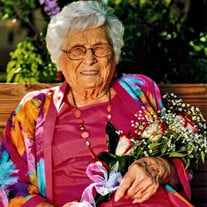 Our precious and beloved mom, Adela Zahn Felux, peacefully went to be with the Lord on January 17, 2022 after a well-lived life of 95 years. Born in Floresville, TX to Leo and Stella Zahn on October 20, 1926, she was the eldest of seven siblings, six sisters and one brother. Adela is survived by four sisters, Rose Polacek and Mary Fischer, both of Floresville, Bertha Walpole of La Vernia, and Dorothy Sugarek of Beeville. Her sister, Annie, and brother, Leo, preceded her in death Her calling as mom and grandma began on April 24, 1945 when she married John M. Felux (deceased). She leaves a legacy of seven children, Janie, John, Tommy, and Rudolph who reunited with her in Heaven on January 17th. Jim, Mary, and Aileen, are her surviving children, who faithfully tended to her needs until her passing. Expanding her legacy are 18 grandchildren, 31 great grandchildren and 11 great, great grandchildren. Adela loved the Lord and served Him through her membership and service at St. Jerome’s Catholic Church in Martinez, Texas. There, for 15 years, she was a housekeeper, medical caregiver, and friend to Father Pruski, priest at St. Jerome’s. She contributed to the St. Vincent de Paul ministry and organized and provided communion for shut-ins. After she moved to Bulverde, she attended and served at St. Joseph’s Catholic Church at Honey Creek. Her ministry, there, was with the Honeybee Prayer Quilters. During her life, Adela enjoyed a variety of hobbies and interests. She was an excellent bowler and was on several bowling teams that competed in tournaments across the country. She crocheted and quilted treasures for family and friends. After she moved to Bulverde, her passions included hatching, raising, and tending chickens. She also loved to sit on her front porch and watch the many birds that visited her home and fed from her collection of well-stocked bird feeders. Long-time friends were made during her participation with the Senior Citizens group in Bulverde. She was quite the shark in her bunko and domino games there, winning more times than she lost, it seemed. Adela Zahn Felux was an authentic, loyal, and sometimes outspoken mom, grandma, sister, and friend. She has blessed many and holds a special place in the hearts of those who knew and loved her.

Our precious and beloved mom, Adela Zahn Felux, peacefully went to be with the Lord on January 17, 2022 after a well-lived life of 95 years. Born in Floresville, TX to Leo and Stella Zahn on October 20, 1926, she was the eldest of seven siblings,... View Obituary & Service Information

The family of Adela Leona Felux created this Life Tributes page to make it easy to share your memories.

Send flowers to the Felux family.