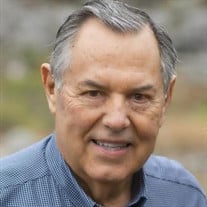 Alfred McIntyre Stringfellow, of San Antonio, Texas, went peacefully to be with his Lord and Savior, on April 26, 2022, at the age of 75 years, after a valiant battle with cancer. “Mac” was a deeply loved husband, father, grandfather, and friend. He was born on November 13, 1946, in Alpine,Texas, to parents Charles C. Stringfellow, Jr. and Mary Virginia Stringfellow. He is preceded in death by his parents and brother, Charles C. (Chuck) Stringfellow III. Mac is survived by his beloved wife of 51 years, Margaret Kathleen Stringfellow; his daughter, Carrie Stringfellow Peterson and husband, Derek; his son, Regan McIntyre Stringfellow and wife, Sara; and his nine treasured grandchildren. Mac’s maternal ancestors were early Brewster County settlers. He was raised in a ranching family, in Alpine Texas. He graduated from Texas Military Institute and later served as a board member. He graduated from Southwestern University, where he met his wife Kathy, serving later as a board member. Mac was a true patriot, loved the great state of Texas, and loved all things outdoors. With this heart, he served his state as a board member, then chairman of the Texas Department of Criminal Justice. He was an active member and former board member of the Texas Wildlife Association. Mac’s greatest joy was his family and friends. He loved the Lord and his family above all. He positively touched the lives of so many who knew him. He will be greatly missed by those who were in his life. The family wishes to offer sincere gratitude to the doctors, nurses, and caregivers from Caring Hands Hospice and Lone Star Visiting Physicians. The funeral service will be held on May 12, 2022, at 11:00am, Wayside Chapel, 1705 N.W. Loop 410, San Antonio, 78213. A graveside service will immediately follow, at Mission Burial Park North at Dominion, 20900 IH-10 West, San Antonio, 78257. In lieu of flowers, a contribution may be made to M.D. Anderson Patient Assistance Fund at https://gifts.mdanderson.org

Alfred McIntyre Stringfellow, of San Antonio, Texas, went peacefully to be with his Lord and Savior, on April 26, 2022, at the age of 75 years, after a valiant battle with cancer. &#8220;Mac&#8221; was a deeply loved husband, father, grandfather,... View Obituary & Service Information

The family of Alfred McIntyre Stringfellow created this Life Tributes page to make it easy to share your memories.

Send flowers to the Stringfellow family.