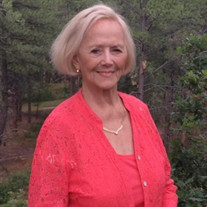 Ann Freeman Dean, our beautiful and most gracious matriarch, “Queen Ann”, departed for the Heavens, hand in hand with God, on December 27, 2021. As royal-like as she was, she will be most remembered as a loving, devoted and giving mother, grandmother and GG by her family-41 in all! She was also a beloved wife, sister, aunt, friend and very special lady to the many she touched throughout her lifetime. Ann Freeman was born on November 2, 1929 in Augusta, Georgia. From a very young age, she and her two older siblings were raised by their Aunt Gertrude and Uncle Glenn in Tulsa, Oklahoma. That is where her love for horses and all animals first began. As a young mother of three small boys, living in Biloxi, Mississippi, she taught dance for Arthur Murray Dance Studio. This is where she caught the eye of a USAF officer who pursued her vigorously, even signing up for dance lessons with her. Long story short, his persistence paid off-not to mention, he promised to give her a girl if she married him! Their military life and memories that followed were some of the best, she would often say, especially the time spent in Germany. The ultimate hostess, she could throw a party together at the last minute, cooking an entire meal with with such ease and grace. People from all walks of life were drawn to her classy southern charm. Her presence would light up any room. She was known a few times for taking in almost-strangers who were down on their luck. Such a generous heart and selfless spirit to the very end. Ann is preceded in death by her husband, Will, and son, Glenn Dean; parents, Gertrude and Glenn Holland; and siblings, Betty F. Mathieson and Gene Freeman, wife Ivalee. She is survived by her children, sons Larry Walker and wife Colleen, Gene Walker and wife Lynne, and Rick Walker; and daughter Julie Ann Bray. She is also survived by 15 grandchildren, David, Amy, Justin, Allison, Travis, Trent, Beverly, Kimberly, Jake, Luke, Lizzie Ann, Amanda, Adam, Lauren and Kelsee; and 21 great- grandchildren. She had many nieces and nephews, who she loved so! She was an incredibly strong and brave woman with such undeniable wit. Pure and selfless love for her family, even in her final hours. We will miss her immensely, but the memories we made will live in our hearts forever! Love you mom♥️

Ann Freeman Dean, our beautiful and most gracious matriarch, &#8220;Queen Ann&#8221;, departed for the Heavens, hand in hand with God, on December 27, 2021. As royal-like as she was, she will be most remembered as a loving, devoted and giving... View Obituary & Service Information

The family of Ann Freeman Dean created this Life Tributes page to make it easy to share your memories.

Ann Freeman Dean, our beautiful and most gracious matriarch,...

Send flowers to the Dean family.