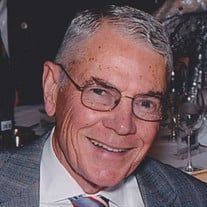 Dr. Charles Lee Bowden, whose decades-long research into the brain chemistry of bipolar disorder fundamentally changed the way that disease was diagnosed, treated and perceived, died March 1, 2022 at his home in San Antonio, surrounded by his loving wife of 61 years Virginia, his beloved cat Al, and his cherished collection of art. He was 83 and had suffered from Lewy Body dementia for a number of years. Dr. Bowden, a lifelong Texan, had humble beginnings. Born in Brownwood and raised in Brady, he was the oldest son of salesman father Walter Bowden and music teacher mother Mary June Bowden. He grew up alongside siblings Bette Bowden Gandy and Harry Bowden. Dr. Bowden went on to study Chemical Engineering and PreMed at the University of Texas at Austin, where he was elected to the prestigious Silver Spurs organization, and then earned his M.D. from Houston’s Baylor University College of Medicine in 1964. He decided to specialize in psychiatry during his internship at Presbyterian Hospital in Chicago, and completed his residency at the Columbia University/New York State Psychiatric Institute in New York City. After serving in the U.S. Public Health Service at the Narcotics Addiction Treatment Center in Lexington, Kentucky, Dr. Bowden returned to Texas for good in 1970, when he joined the Psychiatry Department faculty at the University of Texas Health Science Center in San Antonio, where he would remain for 47 years, rising to Chair and later Emeritus Professor of the department. Over the course of his illustrious career, Dr. Bowden was principal investigator in over 100 psychiatric studies; published more than 400 articles in scientific journals, as well as seven textbooks; and received both of psychiatry’s highest awards, from the National Alliance on Mental Illness (NAMI) and the National Alliance for Research on Schizophrenia and Depression (NARSAD), for his vast contributions to the understanding and treatment of bipolar disorder. He also served on the Board of Trustees of the American Psychiatric Association and as editor-in-chief of Medscape Mental Health, the most referenced electronic medical data base in the world. Dr. Bowden’s most signal professional achievement, however, may have been the clinical trial he led, published in the prestigious Journal of the American Medical Association (JAMA) in 1994, that found the drug Depakote to be effective in treating the manic phase of bipolar disorder. Dr. Bowden testified before the FDA to help secure approval of Depakote to treat bipolar disorder. Before this, Lithium was the only approved medicine for the disorder. Dr. Bowden’s discovery helped untold millions of sufferers of the disease, as Depakote offered them a badly needed alternative to manage their mood swings without the more severe side effects of Lithium. Dr. Bowden went on to publish another study in JAMA in 2003, which found the drug Lamictal to be the most effective drug for the other, depressive phase of bipolar disorder. He continued to be involved with nearly every important study on all aspects of the disorder, as author or consultant, until his retirement in 2017. Dr. Bowden led a vigorous, active life, as well. A slalom water skier who built his own water skis by hand while in high school, he realized his childhood dream of owning his own boat and lake house at Canyon Lake, where he patiently taught countless children and six grandchildren how to water ski, too. He also snow skied in Colorado, where Dr. Bowden, a double black diamond skier into his late 70s, again acted as expert ski instructor to his children and grandchildren. Beloved by his entire family, Dr. Bowden gave kind and sage advice to them over the years from his learned scientific and psychiatric vantage point. He also practiced what he preached with a perennially positive, optimistic outlook on life, which never wavered even as he himself grappled with dementia. Dr. Bowden is survived by his wife, daughters Sharon Bowden Davis (Donn) of Great Falls, Virginia, and Ellen Bowden McIntyre (Patrick) of Nashville, Tennessee, his sister and brother, and grandchildren Cameron, Cooper, and Tess Davis and Charlie, Kathleen, and Virginia (Ginny) McIntyre. A celebration of his life will be held Friday, March 11, at 11 a.m., at the First Unitarian Universalist Church of San Antonio at 7150 I-10.

Dr. Charles Lee Bowden, whose decades-long research into the brain chemistry of bipolar disorder fundamentally changed the way that disease was diagnosed, treated and perceived, died March 1, 2022 at his home in San Antonio, surrounded by his... View Obituary & Service Information

The family of Dr. Charles Lee Bowden created this Life Tributes page to make it easy to share your memories.

Dr. Charles Lee Bowden, whose decades-long research into the...