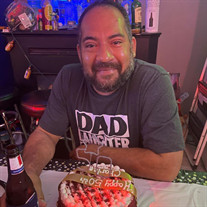 Charles R. McClain Jr. Charles R McClain Jr. received his calling to a higher place on September 19, 2021. He was born on August 20, 1971 in San Antonio, Texas to Charles R. McClain Sr. and Dometila Fitzsimmons. He is preceded by his Mother and Father-in-law, Rosie Martinez and Tiofilo Martinez III. For those who came in contact with Charles, he will be remembered for his ability to light up a room with his silly faces and a laugh that we all know too well. While he seemed like a very serious man, underneath all of that tough exterior, he would do anything for his friends, family and anyone that needed a helping hand. Charles was a jack of all trades, the moment he set his mind to something he wouldn’t stop until he accomplished that task. He spent his life giving his labor, time and most importantly his love to everyone that came into his life. He is survived by his loving wife Rachel of 27 years, his daughters Victoria, Elizabeth, and Sarina, Victoria’s husband Andres, granddaughter Valencia, brother and sister-in-law Christopher and Julie McClain, his sister and brother-in-law Chrystal and Shaun Wood, sister-in-law and brother-in-law Rosie and Rick Mendez, brother-in-law William Martinez, nieces and nephews Chris Jr, James, Isaiah, Calloway, Jayden, Jenaveve, Jacorey, Jacquard, Gabrielle, Alyssa, and Juliana. He is also survived by his many families and friends. SERVICES A Funeral Service will be held on Thursday September 30, 2021 at 3:00 p.m. At Mission Park Funeral Chapels North. There will be a gathering at Rachel's sister Rosie Mendez's home for a reception. Please feel free to contact her if you have any questions. In lieu of flowers please consider donating to or sharing the Charles McClain Memorial Fund. https://gofund.me/130791f8

The family of Charles R. McClain Jr. created this Life Tributes page to make it easy to share your memories.

Send flowers to the McClain family.