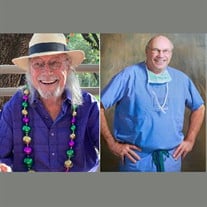 Charles Henry Moore III MD, dedicated Physician and surgeon, loving husband and devoted father, and caring friend, went to be with the Lord on 15 October 2021 at the age of 83 years. He was born in Forth Worth, Texas on 2nd of July 1938 and spent his early years in Galveston, Texas. He was preceded in death by his father (Charles Henry Moore II) from Galveston, TX and Mother (Anita Gardere Moore) from New Orleans, LA. He was the 1st born son with an older sister Anita Moore Doyle and 3 younger brothers Kilborn (deceased), Paul Moore (wife Jane) and Bart Moore (wife Sue). He leaves behind his loving wife Linda Metcalf-Moore and 2 sons James Tristan and Mark Sebastian. He was placed on a train bound for Hill School in Pottstown, Pennsylvania he later graduated from The University of Texas-Austin. He attended medical school at The University of Texas Medical Branch (UTMB) in Galveston, TX. After graduation from medical school he interned at the Methodist Hospital-Houston TX and worked under Dr. Michael E. DeBakey. He returned to UTMB for 4 years of general surgery residency and 2 years of Thoracic and Cardiovascular fellowship, including a rotation in Houston under Dr. Denton Cooley. He served 2 years in the United States Army, serving as Chief of Thoracic Surgery at Womack Hospital at Ft. Bragg, North Carolina. He retired after 2 years of service as a Major. He then went to London, England for 2 years conducting surgical research in cardiac transplantation and artificial cardiac support devices. He was Senior Surgical Registrar at the National Heart Hospital working with attending surgeons, Dr. Donald Ross and Sir Magdi Yacoub MD In 1975 he joined the Thoracic and Cardiovascular surgery practice of Dr. James A. Allums and Dr. Fallon T. Gordon, spending the next 10 years in Beaumont, TX in a busy surgical practice helping thousands of patients. In 1985 the treatment of cardiac transplantation improved, much due to Immunotherapy, so Dr. Moore followed his dream moving to San Antonio, Texas serving as surgical doctor of Humana Hospital and developed the Heart Transplant Program He performed over 300 heart transplants, developed a heart lung transplant program and established a program of Cardiac Assistance with newly developed devices including Bromedicus Symbion, Thoratic and Heartmate, implanting over 200 devices. This program expanded to involve The Christus Transplant Institute, in association with the University of Texas Health Science Center – SA and also became Co-Director of Brooke Army Medical Center Transplant Program. After 20 years of almost continuous on-call and work, Dr. Moore moved to Corpus Christi, TX to continue Cardiovascular Surgery and his new passion Endovascular treatments of Thoracic and abdominal aortic aneurysms. Using new devices developed by Medtronics & Gore endovascular stent grafts, hospital stays were reduced from 10 or more days to only 1 day in most cases. In 2010 still working day & night and had fulfilled his 4 year commitment to Christus Spohn Hospital in Corpus Christi, Dr. Moore received an offer that his wife said “only a fool would turn it down!!” so he trained to use ultrasound and radio frequency, Surgical ablation of varicose veins and treatment of chronic venous insufficiency. No longer on call, he soon become one of the busiest vein surgeons in Texas, performing 10-15 vein procedures per day. Dr. Moore was always respectful and grateful for the expertise of Dr. Paraic Mulgrew, medical Director of transplants, the many surgeons and cardiologists who supported the program, as well as the transplant coordinators who helped develop and run the program. Some of those involved in the program were Donna Arpen, Cheryl Buntley, Laurie Loza, and so many others who helped in the multitude of support systems including Hematology, Pathology, Social Services and Bioengineering. A special thank you to my office manager of more than 20 years Barbara Davis Stewart. Everyone that knew him; family, friends, professional colleagues & patients will miss him terribly but knew he lived life to the fullest.

Charles Henry Moore III MD, dedicated Physician and surgeon, loving husband and devoted father, and caring friend, went to be with the Lord on 15 October 2021 at the age of 83 years. He was born in Forth Worth, Texas on 2nd of July 1938 and... View Obituary & Service Information

The family of Dr. Charles H. Moore III created this Life Tributes page to make it easy to share your memories.

Send flowers to the Moore family.