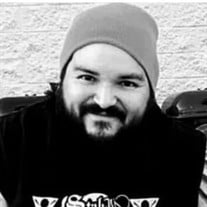 It is with great sadness and a heavy heart that our beloved son, brother, uncle, and friend Christopher Aguirre, age 36, entered eternal rest on September 12, 2021. Chris was born in San Antonio, Texas to Cristobal Aguirre and Barbara Gutierrez. He was met in heaven by his paternal grandparents, Jesse and Petra Aguirre and maternal grandmother Rose Marie Gutierrez. His memory will be cherished and kept alive by his father and stepmother Cristobal and Jacqueline Aguirre; his mother and stepfather Barbara and Steven Minear; maternal grandparents, Rosendo and Sylvia Gutierrez; fiancé, Lauren Zapata; children, Chelsea Riley Aguirre, Christopher James Aguirre, and Kristen Rose Aguirre; sisters, Nicole Kris Mendez, Jasmine Chetwood, Jessica Chetwood, and Jaelen Aguirre; niece, Sophia Patricia Mendez; nephew, Benjamin Cristobal Mendez; numerous other loving family members and friends. Chris was an extremely accomplished musician who began his music career at the age of 15. Chris was a jack of all trades who taught himself how to play the guitar, drums, and bass guitar at an early age. His passion for music was his drive in life, among other things. He was a loving father, a protective brother, a caring son, and a great friend. He loved everyone unconditionally and always had a listening ear when someone was in need. His love was felt by many and always brought endless laughs and great memories wherever he went. Chris was very skilled. He was most remembered for his fine-tuned drumming and blast beats in a band that he created in high school called EviscerateD. EviscerateD was signed to a record label circa 2008 with Severed Records and his band has released two albums since then. He toured around the nation doing what he loved. He played in many other bands throughout his years, Chaotic End and Horrific Visions just to name a few. He was well known throughout the TXDM scene and made many lifelong friends along the way. He was part of the NYDM TXDM Chapter in San Antonio, Texas and was a very successful partnered streamer and content creator on a channel he created called ITFD(TV). Chris touched the lives of many around the world. He will be remembered for his witty sense of humor, his undying love for his family, and his ability to light up a room. Chris lived a happy life surrounded by dear friends and beloved family. His legacy will live on in the hearts and minds of everyone he interacted with as well as those he reached but never met. He was loved by all and will be missed immensely. Visitation will be held on Saturday, September 25, 2021 from 5:00pm – 8:00pm at Mission Park Funeral Chapels South. In accordance with CDC safety precautions, everyone is required to wear a mask and practice social distancing in the chapel. There will be a 100-person maximum occupancy allowed, we thank you in advance for your understanding.

It is with great sadness and a heavy heart that our beloved son, brother, uncle, and friend Christopher Aguirre, age 36, entered eternal rest on September 12, 2021. Chris was born in San Antonio, Texas to Cristobal Aguirre and Barbara Gutierrez. He... View Obituary & Service Information

The family of Christopher Aguirre created this Life Tributes page to make it easy to share your memories.

It is with great sadness and a heavy heart that our beloved son,...

Send flowers to the Aguirre family.