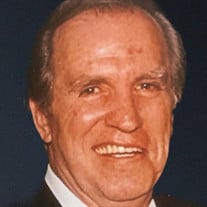 David L. Tanner, loving husband to Marilyn Warden Tanner, passed away peacefully March 25, 2022, in San Antonio following a long illness. David was born October 21, 1941, in San Antonio, Texas to Harvey Lee Tanner and Sarah Anne Williams. He graduated from Jefferson High School in 1959 and while there David was on the Jefferson Mustang football team with honors of being an All-District and All-City player. In addition to other High School activities, he also began working for the Southern Pacific Railroad and continued there while attending San Antonio College for two years and moving onto pursue his college degree in Accounting at St. Mary’s University getting his degree in 1967. After graduating from St. Mary’s, David left the Railroad and began his Accounting Firm partnering with his dear friend Ed Zadick (deceased). They were in business for many years when Ed left to live in Uvalde. His Stepdaughter Tricia followed in his footsteps and became an accountant as well and together they were partners as Tanner, Dean-Ruiz Accounting until his retirement. He kept involved helping Tricia when needed until her death in 2017. David belonged to and was a member of the Sons of the Republic of Texas through 3 Ancestors and he was very proud of that. He recently found out he had a relative who died at the Alamo and was wanting to find out more about him but was unable to get that done before he passed. He had a fascinating Family Tree and was so excited learning about his family who had many famous people in it as well as such fascinating historical stories. David met his wife Marilyn through a friend and though she said he was not her type, she loved his intelligence and his smile and finally agreed to go out with him. They were inseparable from that day forward. They had a dear friend who thought Marilyn was too good for David (jokingly) and would tell them their relationship would not last 5 years, then after 5 years he would say 10, 20 and so on. They were together 41 years at the time of his death, and they always got a good laugh at proving their friend wrong. They went together for a long while before they married. One night their friends were teasing them as to when David was going marry Marilyn and he said, ‘whenever she sets the date.” Those friends pulled out a calendar, set a date, planned the entire wedding within a couple of weeks and they had the most beautiful wedding on December 17, 1994, at the home of their dear friends, Skip and Pat Good. David inherited two Step-daughters with this marriage and through them he became a Grandfather and Great Grandfather of which he doted on those children and was so proud of them and their accomplishments. Together they had many wonderful memories, fun, and exciting years together. They were not perfect and had their ups and downs, but together they were a great team and were devoted to each other. Marilyn had been his caregiver for 3 years when they moved to Franklin Park – Boerne Assisted Living for David to get further assistance as his illness began to deteriorate. He was also receiving Hospice Care at the time of his death. Though his wife knew this time was coming, it came so suddenly and much earlier than they ever expected. He went peacefully surrounded by his loved ones and will be forever loved and missed dearly. He was preceded in death by his Stepdaughter Tricia Dean-Ruiz and is survived by his devoted wife Marilyn Warden Tanner, son Reginald Michael Lagow and partner Brian Cates from Coleman, TX. Daughter Denise Tanner Whitmore from Virginia Beach, VA, Step-daughter Jennifer Loughlin and husband Sean, Dallas, TX. Son-in-law Jason Ruiz (wife Tricia Dean-Ruiz – deceased), Boerne, TX, Granddaughters Maegan Olguin and husband Roland, Boerne, TX, Madison Moody and husband David, San Antonio, TX., Peyton Willis, San Antonio, TX and Grandson Evan Willis, Dallas, TX. Brothers Bill and wife Juliet Tanner, San Antonio, TX, Gary and wife Peggy Tanner, Onalaska, TX. Brother-in-laws John and wife Linda Warden, Boerne, TX and Leo and wife Rita Warden, Houston, TX. His beloved Great Grandchildren, Jackson Olguin and Olivia Olguin. As well as many nieces and nephews, their children, many friends and his loyal, much loved & devoted dogs, Jenny and Maggie. Services will be held Saturday, April 9, 2022, at Mission Park North / Dominion in the Mausoleum Chapel. Viewing from 10:00 am – 10:45. Service begins at 11:00. Private burial for family will take place after the service. Pallbearers are Jason Ruiz, Sean Loughlin, Roland Olguin, David Moody, Jackson Olguin and Evan Willis. Honorary Pallbearers will be Bill Tanner, Gary Tanner, John Warden, Leo Warden, Richard Conroy and Michael Lagow. The family will have a reception following and that information will be provided at the services for all who would like to attend.

The family of David L. Tanner created this Life Tributes page to make it easy to share your memories.

Send flowers to the Tanner family.