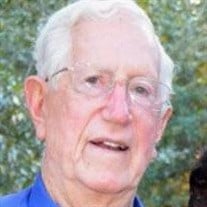 George Daniel Christiansen Jr., aged 90, was born on 29 September 1930 at the family residence at 906 Gevers in San Antonio Texas. On the morning of 18 September 2021, District Fire Chief George Christiansen Jr. passed quietly and reported for duty at his new station in Heaven with our Lord. George Jr. was the son of Fire Chief George Daniel Christiansen Sr. and his beloved mother, Cecilia. George Jr. attended and graduated from nearby St. Gerard’s parochial school where he learned of our Lord and became a devout Catholic throughout his life; much like his mother, Cecilia, who attended church every day of her adult life. George was a proud altar boy at St. Gerard’s and he had an upbringing which gave him a strong work ethic. At a young age, George delivered newspapers in order to pay for his school uniforms. He was resolute in doing his best at everything he was asked to do; and never shied away from a tough task. Some might have thought he was a perfectionist, but in reality George had a yearning for the appreciation of a job well done. At 15 years old, George met and fell in love with Wesa Hope Rivers, who in turn fell deeply in love with George. Even though they were too young for marriage (she 12 and George 15) they felt a bond that would last forever. At 20 years of age, George’s patriotism led him to join the Texas Air National Guard where he served for two years, including 1 year in Korea during the Korean Conflict. Upon his return and honorable discharge and shortly after Wesa turned 18, they married. Wesa was his lifelong companion, soul mate and dearest love for 69 years of matrimonial bliss. George followed his father’s footprints and was accepted into the San Antonio Fire Department. Over the 45 years in the SAFD, George was credited with saving numerous lives; even at a perilous risk of his own safety. He was a first responder that led the way from the front, not the rear. He was a fireman’s fireman who cared deeply for every soul whether it be family, friend, fire fighter and victims that he never really knew. He could sense when someone was troubled and he made it his job to provide comfort, care and where possible, relief. Throughout his life, George was a hard-working provider as he worked several second jobs to keep his young family supported. In retired life, George and Wesa traveled the world; but it was being at home with each other that they loved the most. This is where they enjoyed quality family time loving and supporting their children and their spouses, grandchildren and great-grandchildren which totaled fifteen; and seventeen if you include their two Chihuahuas Cinnamon and Sugar Baby. George was preceded in death by his father George Sr., his beloved mother Cecilia, his brother Floyd, his two sisters Dorothy Belzung and Gladys Sollinger, and one of his granddaughters Crystal Troy. He is survived by his loving wife Wesa, his son David (Jodi), his daughter Sherrie Green (John), his granddaughter Brooke Lutz, and grandsons Jason Green and Brandon Green. George was also adored by seven great-grandchildren Cooper Lutz, Alexander Green, Camila Green, Victoria Green, Bentley Hinson, Fiona Green and Archer Green. His family wishes to express their appreciation to Tami Fields with Amada Senior Care, Ana Medina and April Solis both with Suncrest Hospice for all their loving care. SERVICES Visitation will begin at 6:00 P.M. followed by the Rosary at 7:00 P.M. on Wednesday, September 29, 2021 at Mission Park Funeral Chapels North, 3401 Cherry Ridge Drive. The Funeral Mass with San Antonio Firefighter Honors will begin at 10:00 A.M. on Thursday, September 30, 2021 at Holy Trinity Catholic Church, 20523 Huebner Road. The family is requesting the use of masks and to observe social distancing because of covid concerns. Interment with Military Honors will be at 10:30 A.M. on Tuesday, October 19, 2021 at the Fort Sam Houston National Cemetery. A Map to the Graveside Service location within the National Cemetery is added as a photo to this memorial.

Send flowers to the Christiansen, family.