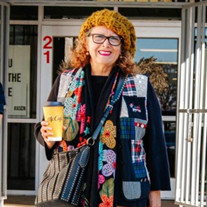 Dora Elia Galvan went to be with the Lord on November 30, 2021 at the age of 65. She was born on December 15, 1955 in Piedras Negras, Coahuila, Mexico to Raymundo Galvan Guerrero and Elva Chapa. She is preceded in death by her father; brothers Raymundo Galvan, Valentine Galvan and Rene Cisneros. She is survived by her mother; daughters Yovela X. Salazar (Juan) and Dayanara Rico-Marquez (Cesar); brothers Homero Cisneros and Sergio Cisneros; grandchildren Zani Marquez, Xanath Marquez, Yaretzi Salazar and Zaniya Salazar and longtime best friends Maricela Martinez and Norma Reyes. She grew up in a small town with dirt roads when the price of a bottle of coke was five cents. As the only girl with 5 male siblings, she learned early on, to take care of others. A trait that would guide her through her entire life. She migrated to San Antonio as a young girl and was immersed in a culture where freedom riders protested for equal right and feminists demanded an end to sexual discrimination. She was married to Roland Rico for nine years beginning in 1974 and had two daughters. As a single mom, she pushed her daughters to become strong, independent women all while fighting for Hispanic and Feminine rights. She was a gardener, planting the seeds of hope, love and progress in her community and her home. She was diagnosed with breast cancer at the age of 53 and fought that too. She retired in July when the cancer returned and continued to focus on her family and community. As the Congressional Office Manager for the District office with Congress Ciro Rodriguez, she poured her heart and soul into every project she worked on. She did everything from office management to case work. She was fearless when working with immigrants, senior citizens and on projects for the youth. She proved that there is power in what one person can do and moved mountains to help others. She learned well, becoming an authority on immigration. “Su voto es su voz,” she would say often. She worked on the selection process for the district congressional nominees to all the Military Academies’. She also, organized the selection process and art exhibitions to select one Congressional High school Art piece to represent the District in Washington DC. Dora served eight years in City Council District 5 as District Director for Councilwoman Shirley Gonzales. Over her tenure she helped thousands of children, seniors, and individuals through community events and neighborhood outreach. She believed that all kids needed to be happy during the holidays and always found a way to provide for them. She was known to go beyond her office duties to help less fortunate families on her personal time and at her own expense. Additionally, she devoted time to develop her interns and young professionals who she worked with and instilled in them principals of servant leadership. She was known for hosting a large annual back to school event for children and a holiday dance for neighborhood residents and seniors. They were the highlight of the year for many people. Thousands of people would attend the back to school event where kids were given school supplies, haircuts, and vaccines, all at no cost. For many families they relied on this and wouldn’t have been prepared for school without her event. She was a grandma and a mother and played her roles strongly making sure to be a part of everything in her daughters and grandkids lives. She advised her daughters in every way on being new mothers, while spoiling her grandkids and allowing them to get away with things we never could've. She was a mother in law playing a role of a mother to her son in laws, making sure they would love and care for her daughters and grandkids in a way she didn't get to experience herself. She was a breaker of generational curses raising her daughters to always strive to do and be better, and know that even a woman alone could accomplish anything she put her mind to. This is the legacy we have from you. You taught us love, kindness, compassion, and how to fight in a tough world. You gave us strength. You gave us might. You fought for us all in one way or another. Not just as a grandma, not just as a mother to us, but one to so many others. As daughter, sister, partner, friend, mother, grandmother and activist, she will be significantly missed by many. For all of us you gave your best. Now has come the time for you to rest. So go in peace, you've earned your sleep. Your love in our hearts we'll ETERNALLY keep. Visitation will begin on Sunday, December 5, 2021 at 10:00 a.m. with a Memorial Service to follow at 11:00 a.m. at Mission Park Funeral Chapels South.

Dora Elia Galvan went to be with the Lord on November 30, 2021 at the age of 65. She was born on December 15, 1955 in Piedras Negras, Coahuila, Mexico to Raymundo Galvan Guerrero and Elva Chapa. She is preceded in death by her father; brothers... View Obituary & Service Information

The family of Dora Elia Galvan created this Life Tributes page to make it easy to share your memories.

Send flowers to the Galvan family.