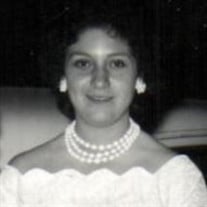 BRAYDEN Esther Forestier Brayden, born November 28, 1941 in San Antonio, Texas to Elia and John Paul Forestier, passed away April 23, 2020. She is survived by her husband of 53 years, Charles Brayden Sr., sons Charles Jr. and Jason Brayden, son-in-law James Gaines, granddaughters Judith and Jillian Brayden, brothers John Forestier, Jose Castillo and wife Sara, and James Forestier and wife Charlotte. She is also survived by her in laws Dudley Higginbotham, Mark Brayden and wife Iris of Baton Rouge, Elaine Gautier of Charleston, Robert Brayden of Louisville and Geneva Lane of Hammond, Louisiana as well as numerous nephews, nieces and their spouses and children whom she loved dearly. Esther was preceded in death by her parents and sister Stella Higginbotham. After graduating from what is now Fox Tech High School, Esther received degrees from San Antonio College, Texas Woman’s University and Webster University. She returned to SAISD as a teacher after graduation from TWU where she devoted her entire career, which spanned over three decades, to educating and empowering the students of the district at JT Brackenridge, Nelson and Ogden Elementary Schools and Cooper Junior High. Upon retirement she continued in education by serving as a mentor to student teachers from UTSA as they prepared to embark on their own careers. Throughout, Esther was a devoted parishioner of St. Gregory the Great Catholic Church where she participated in many service organizations including the St. Vincent DePaul Society and the Altar Society. Also, in line with being a proud San Antonian, Esther was a lifelong Spurs fan who could be heard cheering her team on as she listened to radio broadcasts of the games while she prepared lessons for her students. Overall, Esther was known for her unconditional love for her family and friends, her enormous capacity for caring, her unwavering devotion to children and education and her grace and dignity which endeared her to so many whose lives she touched. She will be missed by so many. SERVICE Visitation will be held on Sunday, April 26, 2020 from 6:00pm-9:00pm, with a Rosary at 7:00pm at Mission Park Funeral Chapels North. Funeral Services will be on Monday, April 27, 2020 at 10:00am at the funeral home chapel, with interment to follow at Mission Burial Park North. Due to Covid 19 restrictions, a 10 person maximum will be allowed in the chapel at one time. Chapel Services will be live streamed and viewable at www.missionparks.com. For personal acknowledgement, you may sign the online guestbook at www.missionparks.com in the Tributes section. MISSION PARK FUNERAL CHAPELS NORTH 3401 CHERRY RIDGE DR. SAN ANTONIO, TEXAS 78230 (210) 349-1414

The family of Esther Forestier Brayden created this Life Tributes page to make it easy to share your memories.

Send flowers to the Brayden family.