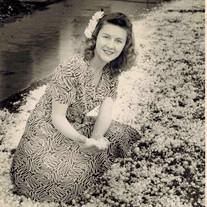 Frances Katherine Monken Dillon of Fair Oaks Ranch, TX, died September 11, 2018. Born December 24, 1922 in San Antonio, a graduate of Brackenridge High School, she attended the University of San Antonio, now Trinity University. Frances lived in Japan, Germany, and many parts of the United States, traveling with her Army Officer husband. A charter volunteer with St. Luke’s Hospital of San Antonio, Mrs. Dillon was also active in St. John Lutheran Church of Boerne, the Boerne Area Historical Preservation Society, the San Antonio Historical Association, and the Meadowland Campus of Youth Alternatives. Survivors include daughter Georganna and husband Stewart Larsen, son Lester Reed Dillon III, grandsons Norman Peter Armitage, George Alexander Armitage and Nicholas Dillon Armitage, as well as six great-grandchildren. Frances Dillon was a member of that “Greatest Generation” that saved the world when fascism and then communism threatened to engulf the world. While her husband Reed Dillon, a career Army Officer, was in harm’s way during these decades, Frances was taking care of the “home front.” This involved tending to the needs of their two children, making sure that these two “Baby Boomers” were fed, clothed, educated, and taught how to be productive members of society – hopefully one that was a still free and proud nation. This was not always easy. The family was uprooted with great regularity based on where her husband was assigned. Her daughter was enrolled in a dozen different schools before graduating from high school! Born and raised in South Texas, where snow was a rare event that seldom even managed to cover the ground, her first “assignment” was to travel with her daughter to Northern Japan, where snow was not only part of every winter, but typically measured in feet, not inches. These travels also included Germany, and pretty much everywhere in the United States from the Atlantic to the Pacific, and many points in between. There were times when she was in effect a single parent, a stranger in some strange land, required to set up a household with little if any help while her husband was on assignment. These were days when women were typically considered “second class citizens,” incapable of complex tasks or decisions. She was living proof of the folly of this view of the “weaker sex.” Her children always felt a sense of stability and security. There would be three solid meals a day (although she really did not enjoy cooking), clean clothes, and an orderly house. Even before her children left home for college, however, Frances went out of her way to help others less fortunate than her. She was involved in at least one charitable activity pretty much her entire life. These activities increased when her children did in fact leave the nest. Perhaps the most moving of these activities were the tutoring of elementary level students who were having reading problems during the 1970s, and acting as a sort of “foster mother” to boys at the Meadowlands Campus of Youth Alternatives in Boerne, boys from broken homes who through no fault of their own found themselves without parents. Perhaps the most touching image from this time is her, a tiny, white-haired senior, pinning a Boy Scouts achievement badge on a young African-American youth who was already a foot taller than her. Grandsons came in the fullness of time. Frances and her husband Reed played important roles in their lives, regularly taking them, one or two at a time, on long road trips in the West. No doubt some of the love all three of them have for the outdoors and the West are due to these wonderful trips. And eventually the great-grandchildren started appearing. Although her traveling days were over, the family has many photos of her proudly holding each of them in her lap whenever she got a chance. Most of her conversation in her later years consisted of telling anyone who would listen about the latest news concerning these children. But she kept reaching out, even in her 90s, in effect adopting his son’s new life partner after the death of his wife as if she was her own daughter, and this lady’s young granddaughter as one of her own great-granddaughters without the slightest hesitation. It seemed like Frances would always exist as a frail but mentally sharp and compassionate elder ready to engage in conversation about anything. This was indeed the case as recently as a few weeks ago, when she was helping her son identify people in old photographs taken many decades ago with amazing accuracy. When she did begin to fail, it was a rapid fall: one might call it a merciful one - the kind that she deserved. When she did pass away, she was in a fine hospital, not in pain, not anxious, and with her son holding her hand to the end. It is going to take a while for her children, grandchildren, great-grandchildren, and those few left of her own generation to realize that we will no longer be able to see her in her chair, smiling lovingly at whomever enters the room, enjoying her favorite TV shows, and reading voraciously. While it is consoling that even her great-grandchildren will have many wonderful memories to draw upon, they will not now be any new ones. This is the way of life – and of death. We will all miss her terribly. Let’s please take this as an opportunity to tearfully celebrate the amazing life of Frances Dillon.

The family of Frances Katherine Dillon created this Life Tributes page to make it easy to share your memories.

Send flowers to the Dillon family.