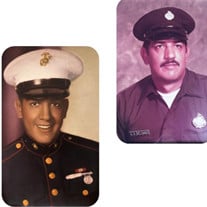 Beloved husband, father, and grandfather, Gilbert Delgado, born December 26, 1935, went to be with the Lord on March 14, 2022 at the blessed age of 86. He was born in San Antonio, Texas to Alfredo and Guadalupe Delgado. Gilbert graduated from Jefferson High School in 1953 and joined the United States Marine Corps that same year. He met the love of his life, Marie “Toni” in 1956 and four years later, on February 13, 1960, they were married in Tucson, AZ and shortly thereafter moved to San Antonio, Tx to start their life together. After being honorably discharged from the Marine Corps, Gilbert served the San Antonio Fire Department where he proudly worked for 35 years and was known as “GG” among his fellow firemen. Along with working hard to provide for his family, he also coached many of his children’s sport teams, including baseball, basketball and volleyball. Gilbert was a dedicated, loyal family man and talked with great pride about each of his children, grandchildren and great=grandchildren, whom all loved him dearly. Gilbert is preceded in death by his son, Gilbert Efren Delgado, parents, brother, Jesse Delgado, sisters Dora Camarillo and Sarah Clark. He is survived by his beautiful and loving wife of 62 years, Marie Antoinette Delgado; children, Cynthia Reyes (Robert), Anthony Delgado (Bernice), David Delgado (Janice); grandchildren, David Daniel Delgado, Christopher Delgado, JeNae Santacruz, Anthony Delgado II, Giancarlo Delgado, Sydney Delgado, Derek Delgado, Robert Reyes, Richard Reyes, Jesse Reyes, Tonnie Reyes; 15 great-grandchildren, and extended family members. Visitation will be Tuesday, April 19, 2022, from 5:00 p.m. to 8:00 p.m. with a rosary at 6:30 p.m. at Mission Park Funeral Chapels South. The funeral services will be on Wednesday, April 20, 2022 at St. Margaret Mary Catholic Church at 11:30 a.m. Interment to follow at Ft. Sam Houston National Cemetery. You may sign the online guestbook at www.mission-parks.com. “fear not, for I am with you; be not dismayed, for I am your God; I will strengthen you, I will help you, I will uphold you with my righteous right hand.” - Isaiah 41:10

Beloved husband, father, and grandfather, Gilbert Delgado, born December 26, 1935, went to be with the Lord on March 14, 2022 at the blessed age of 86. He was born in San Antonio, Texas to Alfredo and Guadalupe Delgado. Gilbert graduated from... View Obituary & Service Information

The family of Gilbert Delgado created this Life Tributes page to make it easy to share your memories.

Send flowers to the Delgado family.