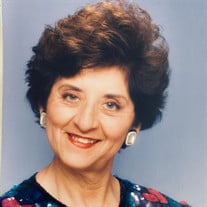 Guadalupe “Lupe” Herrera went to be with her heavenly father on December 4, 2021, after passing away from natural causes. She was born in Burnett, Texas on April 21, 1932, to Kelly and Guadalupe Castillo. When her family moved West to California, Lupe stayed in Austin where she met her husband, Oscar G. Herrera, who passed away in 2011. After meeting in Austin, Guadalupe and Oscar moved to San Antonio where they married, started a family, and called home. Guadalupe first worked in administration within the medical industry, later worked in college registration at St. Mary’s University for twenty years and was a pillar of support to various community programs. Her tireless work ethic spanned decades and her achievements touched many facets of life – family, faith, education, community, government, medicine, sports. Lupe devoted each day to praying the Rosary and her legacy includes over a half century of teaching the value of an education while being a teacher of noble values to her family. She adored her grandchildren and enjoyed spending time with family and friends, walking with her dogs, gathering pecans, and feeding the birds. In addition to her husband, Oscar she is preceded in death by her parents Kelly and Guadalupe Castillo; brothers: Johnny, Kelly, Albert, and Freddy Castillo; sister: Mary Pena. Lupe is survived by daughters Sylvia (Jen) McNeil, Karen Herrera, Sandra (Mike) Koentopp; sons Oscar Herrera Jr, Randy (Mary) Herrera; granddaughters Alexandra Mattson, Kate and Kristina Herrera; step-granddaughter Amy (Josh) Gossett; step-great-grandchildren Luke and Madeline Gossett. Siblings Margie (Ben) Montoya, Pauline Hinojosa, Frankie Castillo, Lucy Castillo. Visitation will be on Tues, Dec. 28th from 6PM-8PM with a rosary at 7PM, at Holy Rosary Catholic Church. Mass of Christian Burial will be on Wed., Dec 29th at 9:15AM at Holy Rosary Catholic Church with interment following at Ft. Sam Houston National Cemetery at 11AM.

Guadalupe &#8220;Lupe&#8221; Herrera went to be with her heavenly father on December 4, 2021, after passing away from natural causes. She was born in Burnett, Texas on April 21, 1932, to Kelly and Guadalupe Castillo. When her family moved West... View Obituary & Service Information

The family of Guadalupe “Lupe” Herrera created this Life Tributes page to make it easy to share your memories.

Guadalupe “Lupe” Herrera went to be with her heavenly father...

Send flowers to the Herrera family.