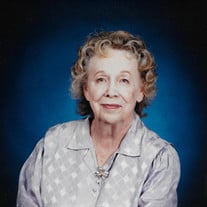 Irene Mary Cook, 98, died Wednesday morning, April 6, 2022 at Granite Mesa Health Center in Marble Falls, Texas. Irene was born in Altoona, Pennsylvania on Jan. 7, 1924, the only child of Samuel Michael “William” Starr and Bertha Koesbauer Starr. She was raised in New Jersey where she attended Saint Mary School in Gloucester. Irene married Henry Cook on October 18, 1947 in Winchester, Virginia. They were re-married in a Catholic ceremony at the pro-Cathedral Parish of Christ the King, Belgrade, Yugoslavia on May 3, 1948. Henry died at their home in South Bexar County on May 28, 1993. Henry and Irene eventually settled in Texas, living on acreage in Floresville and then in South Bexar County where she attended El Carmen Catholic Church. Irene loved animals, especially horses and her beloved dachshunds, Gretchen and then Hilda, and always had a yard full of random outside dogs and a horse or two. Her favorite charities involved those helping animals. Irene was a seamstress and a talented artist, often painting horses, her favorite subjects. She worked for Joske’s Department Store in San Antonio as an illustrator in their advertising department. Her final years were spent in the Texas Hill Country where she received the care she needed with good friends living nearby. Visitation will be held on Friday, April 15, 2022 at Brookehill Funeral Home, 711 S.E. Military Dr. San Antonio, Texas from 10am to 2pm with the Holy Rosary to begin at 12noon. Private burial at Ft. Sam Houston on May 3, 2022.

The family of Irene Mary Starr Cook created this Life Tributes page to make it easy to share your memories.

Send flowers to the Cook family.