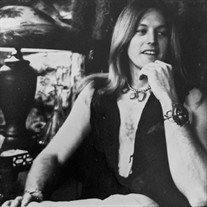 Jack Brevard Brumby Jr. passed away on September 27th, 2021 at home surrounded by loved ones. Though his time with us feels far too brief, Jack lived a rich and full life filled with music, humor, adventure, and love. Born to parents Jack Sr. and Molly, Jack loved exploring the outdoors, fishing, and finding various creatures to bring into the family home. When he wasn’t hiding reptiles in dresser drawers or swimming out to shark-infested sandbars, Jack could be found blaming his many hijinx on the family dog, Pug, or having adventures with his siblings Mark and Angelique. It’s hard to say exactly where Jack's love of music began, but a good guess might be found in the memory of his father playing jazz drums at the factory he owned, while he and his brother Mark, frenetically ran and danced circles around him to the rhythm. Jack would eventually find his chosen instrument in the bass guitar. He played and toured with numerous bands, slept on many floors, made lifelong friends, and ate a lot of mayonnaise sandwiches. Though he mostly stopped touring in the early ’80s, Jack quickly became a permanent fixture in his local San Antonio music scene, where he was easily recognized by his signature short denim cutoffs, long golden hair, and masterful bass playing. In 1976, Jack would marry his wife of 45 years, Valkrye. They would go on to have a daughter, Arian, who Jack proclaimed to be “the best thing they ever did.” After this new addition to their family, Jack soon discovered his incredible gift for woodworking after taking a job at a local furniture-making company. He would go on to work as a self-employed Master Carpenter for over 38 years in San Antonio, TX, creating some of the most solid and beautifully made furniture that will still be around long after all of us are gone. Jack was also a skilled fisherman of many years and even caught a record-breaking red snapper which he would have stuffed and hung on the family wall, much to his wife's chagrin and daughter's terror. Jack possessed a natural athleticism, a strange sense of humor, and the ability to make any animal love him. On one of the many amazing trips Jack got to take in his life, a Tasmanian devil at the Australia Zoo begged to be held by him. The zookeeper, also not immune to Jack's charms, of course, had to oblige. Jack was a beloved son, father, brother, uncle, husband, and friend. His sideways grin, strong hands, and generous spirit will be held tightly by all of us who were fortunate enough to know him. Jack is survived by his wife Valkrye Brumby, daughter Arian Brumby (Alex Favis), brother Mark Brumby (Kimra), nephew Chancellor Hoffman (Milissa), and many cousins, grandnieces, and grandnephews. In lieu of flowers, the family prefers that donations be made in Jack's honor to Oceana.org Jack will be laid to rest on Wednesday, October 13 in the Key West Historical Cemetery in Key West, FL. A celebration of Jacks life will be held at later date.

Jack Brevard Brumby Jr. passed away on September 27th, 2021 at home surrounded by loved ones. Though his time with us feels far too brief, Jack lived a rich and full life filled with music, humor, adventure, and love. Born to parents Jack... View Obituary & Service Information

The family of Jack Brevard Brumby Jr. created this Life Tributes page to make it easy to share your memories.

Send flowers to the Brumby family.