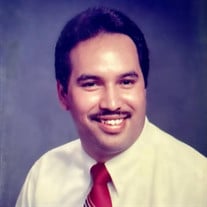 Jesse B. Almaraz (January 21, 1955 – November 6, 2021) Jesse B. Almaraz, 66, entered Heaven on November 6, 2021. Jesse was born on January 21, 1955 in San Antonio, Texas. The son of Joe S. and Janie B. Almaraz. Jesse was the second of five children and grew up on San Antonio’s West Side where he attended school and began to play baseball at the tender age of 8. Gifted in the sport, he served as a talented baseball player in the Pan American Optimus League, as well as in the Edgewood Pony and Colt Leagues, and was named an All-Star pitcher. He also devoted time pitching ball on Sundays for Our Lady of Good Counsel Church for many years. In high school, he made the varsity baseball team at John F. Kennedy and earned All-District and All-City pitcher during his senior year. Upon high school graduation, Jesse was presented with various scholarship opportunities but chose to attend Bee County College, alongside his older brother who also played baseball. Jesse served as the team’s starting pitcher in 1974 at Bee County. He later signed with the Mexico AAA League for the Sabinas Pirates as a starting pitcher. Aside from being an extraordinary baseball player, Jesse was an amazing chef and created an array of culinary masterpieces. He shared his brilliant culinary skills during his employment with Trinity University, The University of the Incarnate Word, the Federal Reserve Bank, where he served as director of culinary services. He often catered for special occasions like family weddings, non-profit events and church gatherings. But, most of all, Jesse enjoyed preparing delicious meals for his family and friends while sharing fond memories of loved ones. One of his favorite pastimes was watching comedy movies with his family over a Big Red and tacos, as well as meeting family for breakfast on weekends. His joy and laughter was contagious. Jesse was one-of-a-kind. So loyal and endearing to those he loved. Jesse, a born-again Christian, served as a worship leader in various San Antonio churches. He had an amazing voice that was discovered during his high school years when singing in talent shows. We’re sure he’s now singing to his Lord and Savior Jesus Christ, with the angels and saints in Heaven. Some of his favorite Christian artists included Del Way, Alvin Slaughter, Ron Kenoly, Michael English, and Sandi Patty. He recorded various worship songs that he shared with close friends and family. Jesse often shared his testimony of when he gave his life to Jesus Christ while attending the Lighthouse Christian Fellowship Church in San Antonio. He led many Bible studies in his home and shared the love of Christ with others wherever he went. He was passionate about his faith and would literally give the shirt off his back to help someone in need. He never grew tired of serving his neighbors – whenever someone needed support, he was there to pray and encourage you, as written in Galatians 6:2. He will be greatly missed. His legacy of extravagant joy and expectant hope in the one who gave him eternal life will live on in those whose lives he’s impacted over the years – Romans 14:17. Thank you, Jesse, for giving to the Lord. Many lives were changed. And, we’re so glad you gave of your time, talents, and treasures to further the Kingdom of God. Until we meet again in Heaven. See you there! Jesse is preceded in death by his parents Joe S. and Janie B. Almaraz; his grandparents Rodolfo and Frances Bishop, José and Cesaría Almaraz; his niece Janell Sáenz; as well as several uncles, aunts, cousins, and beloved furry friends. Jesse is survived by his four children Melissa Almaraz-Sansone and husband Sam, Marissa Almaraz-Caraballo and husband Aaron, Abraham Almaraz, and Erika Almaraz; his grandson Sammy Sansone; his four siblings Joe B. Almaraz and wife Nancy, Johnny B. Almaraz and wife Tonya, Julie Wiley and husband Jim, and Jeanette Saenz and husband Hector; as well as various nephews, nieces, and cousins. The family will receive friends from 6:00 p.m. to 9 p.m., with a Celebration of Life service at 7 p.m. on Monday, November 15, 2021 at Mission Park North, located at 3401 Cherry Ridge, San Antonio, Texas. Funeral Service will be held at 12 p.m. on Tuesday, November 16, 2021 at Mission Park North. Interment will follow at San Fernando No. 2 Cemetery in San Antonio. In lieu of flowers, please consider a donation to NAMI San Antonio (National Alliance on Mental Illness) in memory of Jesse B. Almaraz.

The family of Jesse B. Almaraz created this Life Tributes page to make it easy to share your memories.

Send flowers to the Almaraz family.