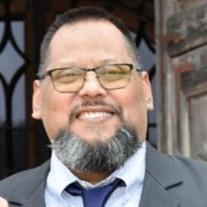 Julian Gutierrez Jr. went home to be with his Lord and Savior on March 29, 2022. He was born on October 14, 1967 in San Antonio, Texas. He attended Fox Tech High School and chose to devote his life to serving the community as a law enforcement officer. Julian attended the Law Enforcement Academy at San Antonio College and served as an officer in the San Antonio area for many years. Upon relocating to the Rio Grande Valley, Julian protected several cities as a Peace Officer and was appointed as Chief of Police in La Joya, Texas in 2011. Julian continued to serve in Law enforcement until his retirement in 2021. Julian loved to barbecue, spend time with his family, but most of all he loved to make all those around him laugh. Julian was known as a prankster among all his friends. Other hobbies included: cooking, fishing, shooting at the gun range, spending time with his dog Spartacus, and supporting the Nikki Rowe Cheer team. His love for others and his sense of humor has left a mark with all those who knew him and with wonderful memories that will last a lifetime. Julian is preceded in death by his father, Julian Gutierrez Sr. He is survived by his loving wife of 25 years, Cindy Shuman - Gutierrez, children Sabrina, Samantha, Aaron, Justin, and Adriana Trevino (Ryan). He is also survived by his mother, Aurora Cantu (Alejandro), brother Armando Gutierrez, sisters Tina Lara and Alexandra Cantu all from San Antonio. He is also survived by two granddaughters, Deztanie and Ariel, numerous nieces, nephews, cousins, and loving friends. The family invites all those in law enforcement to attend the services in uniform to honor their brother in blue. Visitation will be held for Julian Gutierrez Jr. at BT McAllen, on Friday, April 8, 2022 at 7:00pm. The address for BT McAllen is 2001 W. Trenton Rd, McAllen, Texas. Additional visitation will be held on Sunday, April 10, 2022 from 4:00 to 8:00 p.m. with a Prayer Service to begin at 6:00 p.m. at Mission Park Funeral Chapels South in San Antonio, Texas. Funeral Service will be on Monday, April 11, 2022 at 10:00 a.m. at Mission Park South. Interment to follow at Mission Burial Park South.

Julian Gutierrez Jr. went home to be with his Lord and Savior on March 29, 2022. He was born on October 14, 1967 in San Antonio, Texas. He attended Fox Tech High School and chose to devote his life to serving the community as a law enforcement... View Obituary & Service Information

The family of Julian Gutierrez Jr. created this Life Tributes page to make it easy to share your memories.

Julian Gutierrez Jr. went home to be with his Lord and Savior...

Send flowers to the Gutierrez family.