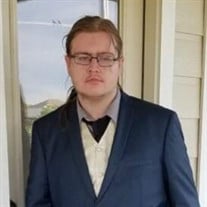 Koltun Matthew O’Neill, of San Antonio, Texas, passed away at home, in the comfort of his grandmother’s arms, on December 17, 2021, after a two-week struggle with illness. Known to friends and family as “Koko,” “Pumpkin,” “BuggerBut,” or “Bubby,” Koltun was born on May 22, 1998, in San Antonio, and grew up to be an incredibly smart, loveable, friendly, caring, funny, and affectionate brother, son, grandson, great-grandson, and friend. Family was everything to Koltun, and he never shied away from giving and receiving hugs from the people he loved most. A voracious reader, Koltun would finish a whole book in a matter of hours, and had even begun to write one of his own. In addition to reading and writing, he enjoyed watching horror movies, listening to Panic! At The Disco, playing PlayStation, getting into debates with his sister, and spending time with friends online. Koltun is survived by his mother, Jennifer O’Neill; his sister, Keliza O’Neill DeHoyos and his grandparents, Christopher and Jeannette Robbins. Koltun was greeted in death by his great-grandmother Annabelle Martin; his great great-grandmother Ruth Gaisford; his grandfather Milton “Cowboy” Baumgartner and his stepfather David Dehoyos, Jr. A service for Koltun will be held on Saturday, January 15, 2022 at 3:00 p.m. at Mission Park Funeral Chapel South. The family welcomes expressions of love and support, as well as the sharing of pictures and memories of Koltun.

The family of Koltun Matthew O'Neill created this Life Tributes page to make it easy to share your memories.

Koltun Matthew O’Neill, of San Antonio, Texas, passed away at...

Send flowers to the O'Neill family.