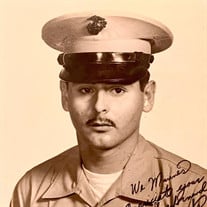 Larry Charles Cox Sr. of Corpus Christi, TX passed away on January 29, 2022 at the age of 70. Larry was born on May 22, 1951 in San Antonio, Texas. Larry was an amazing father, he lived an extraordinary and hard life. At the age of 17 years old he enlisted into the United States Marine Corps. Soon after he was sent off to Vietnam, while there he turned 18 years old and drove an Amphibious Tank aka Amtrak while serving in Vietnam. Larry also served in the Army Reserves and the Air National Guard. Larry retired from the Corpus Christi Army Depot as a Crew Chief, where he worked on various helicopters performing flight tests. Aviation was one of Larry's most prized accomplishments as he worked on so many aircrafts throughout his life. However, the thing Larry loved the most, was spending time with his family and loved ones. He loved to have a good time going fishing with his sons and grandchildren, having barbecues, and working on classic cars. Larry was a very charitable person. While growing up his family was very poor, as a child he kept his shoes until well after they had holes worn into the soles. When Larry grew up, and had his own family, he made whatever sacrifice was necessary to ensure that his family and loved ones had everything they needed. Larry will be missed by all those that knew him. He passed away at home surrounded by all of his children and grandchildren who were with him, and held his hand as he went to our Lord in Heaven. We know that he is our Angel in heaven and will continue to watch over us always. Larry is survived by his three sons; Larry C Cox Jr, Christopher E Cox, and Vincent A Cox. He will be greatly missed by his eight grandchildren Brianna Cox, Jett Cox, Alexzandra Cox, Maverick Cox, Nevaeh Cox, Colton Cox, Connor Cox and Leila Cox. Visitation will be held on Wednesday February 16, 2022 from 5:00 pm to 8:00 pm at Alamo Funeral Chapels with a rosary from 8:00 to 9:00 pm. Funeral services will be held at St Patrick's Catholic Church, 1114 Willow St, San Antonio, Texas 78208 at 9:00 am on February 17, 2022, with a burial to follow at Fort Sam Houston National Cemetery 1520 Harry Wurzbach Rd, TX. We welcome you to come celebrate the life of Larry.

Larry Charles Cox Sr. of Corpus Christi, TX passed away on January 29, 2022 at the age of 70. Larry was born on May 22, 1951 in San Antonio, Texas. Larry was an amazing father, he lived an extraordinary and hard life. At the age of 17 years... View Obituary & Service Information

The family of Larry Charles Cox created this Life Tributes page to make it easy to share your memories.

Send flowers to the Cox family.