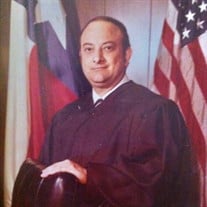 Judge Leo Mendoza Jr. Leo Mendoza, Jr. March 6, 1938 – April 2, 2022 A loving husband, father, grandfather, great-grandfather, brother, uncle and friend, Leo Mendoza, Jr. went to be with the Lord on April 2, 2022, at the age of 84. He was born on March 6, 1938 in San Antonio, Texas. He is preceded in death by his parents, Leopoldo Sr. and Florencia Machado Mendoza,, and brother, Raul Mendoza Sr. Leo is survived by his loving wife of 63 years, Mary Lou Leal Mendoza; daughters, Kathryn Malish and husband Anton T. Malish Jr., and Melissa Mendoza Casillas and husband Richard A. Casillas. 4 grandchildren, Claudia Nicole Mendoza-Malish, Johnathan A. Malish, James Richard Casillas and Matthew Leo Casillas and wife Sara Casillas. 2 great-grandchildren, Ellie Patricia Casillas and Aubrey Renee Casillas; sister, Mary Lou Rosales and husband Roy Rosales, Sister-in-law, Oralia Mendoza; Niece, Debra Bishop and nephews, Robert Rosales, Raul Mendoza Jr., and Rick Mendoza and other In-laws, Nieces, Nephews and extended family members. He was born and raised in San Antonio Texas and graduated from Burbank High School where he was a star basketball guard player. He was one of the finest ball handlers. He was known for putting on a show for the crowd with his intricate dribbling skills. He attended San Antonio College and was in the Air Force Reserves. He loved the business world and owned and operated many successful businesses. The Holiday House Steakhouse & Party House was one of his most successful and popular businesses. He was also in Real Estate Investments. In 1970 he was approached to run for public office. He loved public service and decided to run for the San Antonio City Council. He ran with the GGL (Good Government League) and started his career in public office. His campaign slogan became popular (The Little Man with a lot of guts). •He was elected to the San Antonio City Council for 2 terms. He served on the San Antonio City Council and as a Mayor Pro-tem from 1971-1974. • He was elected to Justice of the Peace, Pct. 5, from 1975-1978 As Justice of the Peace he married over 3,000 couples. • He served as Bexar County Commissioner, Pct. 1, from 1978-1984. •He served as Bexar County Judge and retired as Bexar County Judge in 1984. Throughout his career in public office he met many famous personalities such as , Carol, Burnet, Antonio Aguilar, Cantinflas, The Osmond Bros. Tom Jones, Johnny Cash, Hillary Clinton, Roger Staubach, Arnold Palmer, Vicente Fernandez, Victoria Principal, and many more. He enjoyed sharing stories and looking back at the collection of pictures he had of all the famous personalities he had met during his years of public service. Some of the Organizations he was involved with were LULACS, Optimists Club, Lions Club, HeartFund, and Boy Scouts. • He was active with the San Antonio Neighborhood Youth Organization (SANYO). • He was a Member of the Manpower Executive Committee. •He was also a Member of the Metropolitan Youth Council. • He served on AACOG Executive Council. After his retirement as Bexar County Judge in 1984, spending time with his family is what he most looked forward to. Enjoying his 4 grandchildren and 2 great- grandchildren. He especially enjoyed being with his sweetheart Mary Lou. He would always tell her “Every love story is beautiful, but ours is my favorite”. He was not only a family man but a Man of God and was a member of St. Leonard’s Catholic Church and St. Pius X Catholic Church in San Antonio, Texas. Some of his very favorite quotes were: “Do your very best and leave God the rest” “GOD is good, All the time, All the time GOD is good” In Lieu of Flowers, A donation in Judge Leo Mendoza’s Jr. Honor to: The National Kidney Foundation https://www.kidney.org/donation and St. Pius X Catholic Church (3303 Urban Crest Dr. San Antonio, TX 78209) https://stpiusxsa.org/

The family of Leo Mendoza Jr. created this Life Tributes page to make it easy to share your memories.

Send flowers to the Mendoza family.