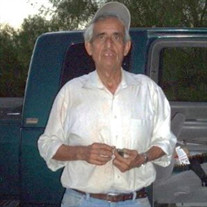 Margarito Rivera Jr., 81, passed away on Tuesday October 26, 2021 at the VA Hospital in San Antonio, TX. Born June 14, 1940 to father Margarito Rivera Sr. and mother Aurora Rivera, in Donna TX. He was an US Army veteran with story after story of his Army travels. He would recall countless adventures with the US Army while stationed in Europe during the Vietnam War era. He would reminisce about his Army buddies, the rough weather in Germany, and the shenanigans they would get into. He was a retired delivery/salesman that loved to talk to people and was well remembered by everyone he met. He was a constant storyteller and joker. He will be remembered for his constant joking, his infectious smile and laughter. He seemed to make friends everywhere he went. He married Margarita Vera Rivera in March 24, 1968. She preceded him in death on September 5, 1998. One of his favorite stories was about the day they met, and how she didn’t believe him when he told her his name. He asked her for her name, and she said Margarita Vera. He replied with his name, Margarito Rivera. She immediately thought that he was making fun of her name, so she walked away from him. He said he had to show her his ID for her to believe him. This broke the ice and the rest is history. This was one of his favorite stories, and told it many times. Some of his other favorites stories included his brothers and sisters and their younger years working in the migrant fields. He would reminisce about the family working together picking different fruits, vegetables, and cotton. He was very proud of these years and all the memories it left with him. He is survived by his son Jaime Rivera, daughter Cynthia Swearengin (Joel) , 2 grandsons Uriah & Gavin Swearengin. He is also survived by 2 brothers, Francisco Rivera, Rogelio Rivera and his spouse Juanita Rivera, 3 sisters Juanita Rivera, Francisca Rivera and Lupita Rivera. And, numerous nieces, nephews, great nieces and nephews.

Margarito Rivera Jr., 81, passed away on Tuesday October 26, 2021 at the VA Hospital in San Antonio, TX. Born June 14, 1940 to father Margarito Rivera Sr. and mother Aurora Rivera, in Donna TX. He was an US Army veteran with story after story... View Obituary & Service Information

The family of Margarito Rocha Rivera Jr. created this Life Tributes page to make it easy to share your memories.

Send flowers to the Rivera family.