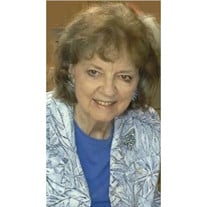 Marian was born in San Antonio TX on July 3, 1934 to August Denson Black and Esther Arnell DuBose Black. Marian was raised in San Antonio and attended the Riverside Baptist Church while living here. As a young girl, Marian was a princess that rode on one of the Fiesta floats, and was a student at Jackie Flannigan School of Dance and was part of a tap dance group that entertained wounded servicemen at the Brook Army Hospital (now BAMC) during World War II. She was set to attend Brackenridge HS when the family moved to Tulsa OK with the Texaco Oil Company. Marian attended Will Rodgers HS and The University of Tulsa where she became a sister in the Delta Gamma Sorority Gamma Beta Chapter in 1951. It was there she met her husband James Dean Hull II of Kappa Alpha Fraternity and was honored with being named the Kappa Alpha Rose of the MU Chapter. They were married on June 19, 1954. Marian finished her degree in 1956. While living in Tulsa, Marian and Jim had two children, Cindy and Steve, before their family moved to Houston TX. She was a stay-at-home mom for awhile, volunteering her time to help lead Cindy’s Girl Scout Troop. It was in 1975 she felt the call to teach and began a 20 year teaching career at Sharpstown Junior High School. Marian taught Earth and Life Sciences and loved being in the classroom with her students, helping with science lab experiments. She was not so fond of the early morning “gate duty” though, especially on those cold Houston mornings. After retiring Marian and Jim moved back to the San Antonio area and bought a home on a hillside in Spring Branch TX, across the street from the Guadalupe River. They became active members of St. Paul Lutheran Church, where she was a member of the Women’s Book Club and Handbell group for a short while. Marian was active in the Red Hats Society and later Blue Bonnet Belles. Marian loved to play the mountain dulcimer and took many trips to Mountain View, Arkansas where she and Jim would sit in on jam sessions with other musicians from around the country. For several years, they hosted The Guadalupe River Pickers music group in their home that recorded 2 CD’s and played at area festivals. Marian enjoyed sewing, painting, stained glass and other crafts. Marian was preceded in death by her husband Jim and is survived by her two children; Cindy Cox and Stephen Hull; four grandchildren Matthew Cox, Amanda Cox, Denson Hull and Olivia Hull along with four nephews and one niece, and dozens of cousins. Marian was a faithful Christian and believed that Jesus died on the cross for all who believed to be saved. Marian is now in Heaven for eternity in the loving care of Jesus Christ, God the Father, and The Holy Spirit. If here, Marian would say, "Amen to that!" She will be laid to rest at Little River Baptist Church and Cemetery in Milam County next to her husband.

Marian was born in San Antonio TX on July 3, 1934 to August Denson Black and Esther Arnell DuBose Black. Marian was raised in San Antonio and attended the Riverside Baptist Church while living here. As a young girl, Marian was a princess that... View Obituary & Service Information

The family of Marian LaNelle Black Hull created this Life Tributes page to make it easy to share your memories.