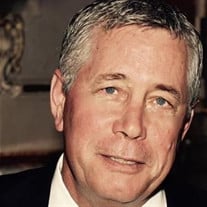 Mark Owen Moore, 61, went to be with the Lord on September 6, 2021, in San Antonio, Texas. He was born on August 31, 1960, in San Juan, Puerto Rico to Harold and Virginia Moore. Mark grew up in a military family and lived in many places, ultimately settling in Nevada, MO. Mark graduated from Nevada High School in 1978. Mark enlisted in the United States Army on August 3rd, 1987. During his distinguished career, he earned the Defense Meritorious Service Medal in the service of his country in support of the National Security Agency, the United States Army, and the Department of Defense. He was also awarded the Knowlton Award, Army Commendation Medal, Army Achievement Medal, Air Force Outstanding Unit Award, Army Superior Unit Award, Army Good Conduct Medal, National Defense Service Medal, and the Global War on Terrorism Medal. After 20 years of selfless service to the country, Mark retired as a First Sergeant on August 31, 2007. He immediately started with Radiance Technologies as the Director, CONUS Intelligence and Training Programs, Operational Intelligence Group in support of INSCOM. . Mark was a member of Our Lady of the Atonement Catholic Church. He had a great devotion to the Rosary and deep faith in God. Mark’s passion for his faith, his family, and his generous giving spirit will remain in the hearts of many forever. No matter how long someone knew him, he had a profound and lasting impact on them. Mark loved to play golf, poker and knew the value of a work-life balance. He never took anything too seriously that did not ultimately matter. Mark was an amazing dad, brother, son, uncle, cousin, battle buddy, 1st Sergeant, leader, friend, and most importantly an example of how to treat people especially the love of his life, his wife, Susan. He is preceded in death by his parents Harold and Virginia Moore. He is survived by his loving wife of 38 years, Susan Moore. His daughters; Katee Gray and husband Corby of San Angelo TX, and Karlee Bolin and husband Nick of Carrollton TX. His son; Kyle Moore and wife Amy of San Antonio TX. His three grandchildren; Cambryn Gray, Owen Moore, and Mary Rose Moore. His brother; Kirk Moore and wife Sue Ann of Spring, TX. His Father-in-Law and Mother-in-Law; Jack and Jean Kearns of Boerne, TX. Brothers-in-Law; Chad Kearns and wife Cheryl of Lincoln, NE, and Warren Kearns and wife Stephanie of Hermitage, AR. Sister-in-Law, Amee Cave and husband John of Castle Rock, CO., and numerous nephews, nieces, and cousins. SERVICES A visitation will be held at Our Lady of the Atonement Catholic Church, Tuesday, September 21, 2021, beginning at 5:00 p.m followed by a Rosary at 6:00 p.m. Mass of Resurrection will be held at Our Lady of the Atonement Catholic Church, on Wednesday, September 22, 2021, at 11:30 a.m. Interment will follow at Fort Sam Houston National Cemetery, with Full Military Honors. In Lieu of Flowers memorials may be made to: The Atonement Catholic Academy online giving. Please select drop down "Mark Moore in Lieu of Flowers Donation" https://giving.parishsoft.com/app/giving/our1541159 Or Wounded Warrior Family Support Foundation. www.wwfs.org/donate

Mark Owen Moore, 61, went to be with the Lord on September 6, 2021, in San Antonio, Texas. He was born on August 31, 1960, in San Juan, Puerto Rico to Harold and Virginia Moore. Mark grew up in a military family and lived in many places, ultimately... View Obituary & Service Information

The family of Mark Owen Moore created this Life Tributes page to make it easy to share your memories.

Send flowers to the Moore family.